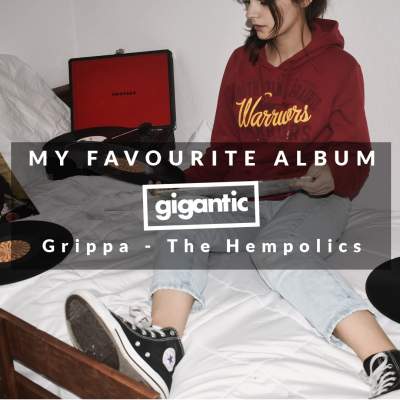 Gigantic has a passion for music which is shared by #GiganticGigGoers the world over and we love to hear which records inspire the truly creative. In this edition of My Favourite Album, we hear from Grippa of the reggae enthused renegades The Hempolics who tell us all about the Carlton and The Shoes record you definitely need in your collection.

London based band The Hempolics arrived in 2017 to huge fanfare with the release of debut album ‘Kiss, Cuddle & Torture Vol. 1’. Their deep dive into reggae roots saw them selected by BBC 6music for ‘Album Of The Day’ and struck a chord with the likes of Lauren Laverne who invited them to play a live session on her show plus Liz Kershaw who named it her ‘Album Of The Year’.

This year has seen the hemp heroes return with their gloriously radiant second album ‘Kiss, Cuddle & Torture Vol. 2’. Fully exploring their passion for dub, trip hop dancehall and even pop; The Hempolics look for even greater success in 2020 and beyond.

Released on their very own label Zee Zee Records via Kartel Music Group, CLICK HERE to stream or grab your cop of ‘Kiss, Cuddle & Torture Vol. 2’.

Carlton and the Shoes ‘Love Me Forever’

Sometime in the early 90’s I bought the cd, when it got re-released for that format. If you have the original vinyl press of this album you could get £500 for it. It’s a proper prize album.

This album is just such a great recording. Every tune on the LP is such great song. It’s rocksteady at its purest and finest form for me. This is a vocalist album. The harmony’s and the arrangements are class and the musicianship is beautiful. One of Studio One’s all time greatest records.

My favourite song on this album… That’s so hard ‘cos they are all so special. It’s all one record and it’s all about the same meaning. The meaning of love. They do it with so much soul. Each song gets me with the purest lyrics of love and happiness. If I really have to choose then maybe ‘I’ve Got Soul’ - the 4 bar horn intro is like something from ‘The Good, the Bad and the Ugly’ with a little SinnDrum sound well before it’s time. Then the guitars rhythm which holds it all together probably played by Carlton Manning is class. Studio One at its finest. And at the outro all three sing with that horn line as the song is fading out. But it’s like all three of them are singing the lead all the way from start to end. One vocal with three singers. Making it sound like it’s from the stars above. The lyrics “Deep in my heart I know, our love will last forever, forever and a day, La La la la la.” Whattttt! So good. Pure Jamaican rocksteady reggae vibes, that you just can’t beat. The whole piece of music, song to song is quality. Not a bad track on the whole LP.

Originally the band was called Carlton And The Shades, due to some miss print on the LP cover at the print. The dude printed shoes instead of shades.

Even sometimes now it’s Carlton and the Shoes or Carlton and his Shoes. Only in Jamaica. I think they have one of the coolest band names ever. So, thanks for that misprint. One of the best names for a band ever.

They are three brothers, the Manning brothers. I think Carlton was the oldest of the three and the two youngest Donald and Lynford, with Alexander Henry formed the Abyssinians later on. Who are probably my second favourite Jamaican band ever. Funny enough, on the B side of the first single with Carlton and the Shoes the title track ‘Love Me Forever’ has a song called ‘Happy Land’ which basically got turned into ‘Satta Massa Gana’ after the music from Jamaica turned to more Rasta and Roots into the 70’s. It’s probably the most covered reggae song ever.

Another funny thing about the album is that Coxsone Dodd, owner of Studio One, didn’t want to release it and his best mate Peckings had to twist his arm. Peckings was running the Studio One operation in the UK and had to commission the art and pay for the first press himself in order to get the record out there.