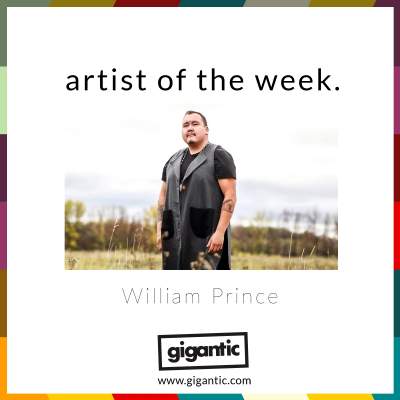 William Price is the Canadian singer who draws on country, gospel and all things rootsy with the beautifully baritone voice.

Having earned accolades from critics around the world with his Juno-winning debut ‘Earthly Days’ in 2018, Prince now returns with his equally powerful second album ‘Reliver’ which is set to be one of the most important record releases of 2020.

Don’t miss your chance to see him when he performs his new material with live shows in the UK – tickets on sale with Gigantic.

Prince first began getting a reaction with the release of his single ‘Breathless’ in 2018. Emotionally charged yet wonderfully chilled, it’s the relaxed song that speaks to every listener. It was a wonderful first taste of what was to come as it would appear on his remarkable debut album ‘Earthly Days’. It was recorded with the assistance of Steve Nolan who helped Prince find the confidence to work at a slower pace.

“He helped me fast-forward into a comfort zone of ‘It’s okay to play a little slower, it’s okay to be quiet and invite people in to listen to you and really hear you. I’ve always kind of had a softer, slower approach to things in my own writing, and he sort of solidified that that was okay.”

A hue hit with critics and listeners, album ‘Earthly Days’ saw Prince win the JUNO award for Contemporary Roots Album of the Year. The huge success of the first record spread his name across the globe, creating an international fanbase that was eager to see what he would do next.

With expectations significantly raised, fans were definitely not disappointed with the release of the highly anticipated ‘Reliver’ earlier this year. The stunning second album saw him reconnect with producer Scott Nolan at Winnipeg and Dave Cobb in Nashville to once again capture the magic which made his first record so special.

It seems lighting can strike in the same place twice as reuniting the dream team certainly worked in creating a thrilling listen. However, the process was not easy owing to the tragic death of Prince’s father. The hurt threatened to derail the recording which was split into two sections, but would add addition layers of emotion and poignancy as Prince poured his pain into the music.

"I was going through the loss of my dad, and estrangement and not really feeling like I was in a place to ever really have a relationship again. I don't want to understate just how tough things were."

William Prince is likely to win many more awards with new record ‘Reliver’ which, despite the tragic circumstances surrounding the recoding, remains remarkably optimistic and it’s a truly life affirming listen. Prince will be playing UK dates to promote the new material later in the year and tickets are on sale with Gigantic.