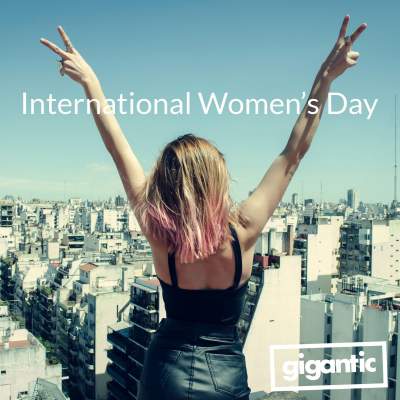 Fighting for the advancement of gender equality across the world, International Women’s Day 2019 is a call for action under the slogan #BalanceForBetter.

Gigantic is proud to join with International Women’s Day in celebration of the progress which has led to the advancement of rights, furthering the possibilities and achievements of women around the globe. With that in mind, here is our recommended list of the most excellent female performing acts and theatre shows telling the stories of strong women we currently offer tickets for.

Christina Aguilera sure has come a long way! First impressing audiences at local talent competitions as a child with her audacious singing voice which seemed almost too big for her young age, she soon joined the ranks of The Micky Mouse Club where she appeared on television screens across the States. However, it was the release of the single ‘Genie In A Bottle’ which would propel her to international fame and announce the arrival of one of the best-selling music acts – ever!

Gigantic is very pleased to be able to now offer you tickets for Aguilera’s arena tour on which she will be playing some of the biggest British stages including The SSE Hydro at Glasgow, The SSE Arena – Wembley in London, Manchester Arena and Resorts World Arena at Birmingham during November.

When she isn’t teaming up with such amazing acts as David Guetta, Years & Years, Rudimental and Clean Bandit, Jess Glynne is busy topping the charts all around the world with her inspiring take on pop and house.

‘Always In Between’ is her latest album which shot straight to No. 1 upon release in October of last year, firmly confirming her as one of the hottest British acts right now. She tours extensively this summer but tickets are already selling out fast so make sure you get yours now!

Christine and The Queens

Christine and The Queens is the stage name of French songwriter and producer Héloïse known for her experimental sound and idiosyncratic style. Her debut album ‘Chaleur humaine’ has hit Platinum certification and named by NME as one of their albums of the year. Her success continued with following LP simply titled ‘Chris’.

Letissier tops the bill at All Points East on Sunday 26th of May, with support coming from such major names as Metronomy, Maribou State, Beach House, HONNE, Kurt Vile & The Violators, Toro Y Moi, EZRA COLLECTIVE, Baloji and James Blake.

Christine and The Queens tickets are currently available.

We couldn’t really create a list of gigs and shows for International Women’s Day and not mention Bikini Kill! The original rebel girls brought their riot to the world in the form of provocative live shows, performance art, radical speeches and fiery fanzines to become one of the most influential punk bands of the 90’s and beyond.

They have made the surprise decision to reform and play two nights at O2 Academy Brixton proving that they are as vital as ever.

Last year saw the release of Kansas City born funk and R&B singer Janelle Monáe’s incredibly third LP ‘Dirty Computer’ which hit No. 8 in the UK Charts, supported by superb singles as ‘Make Me Feel’, ‘Django Jane’, and ‘Pynk’ and earned her a couple of nominations for some little known award ceremony called The Grammys including the category for Album of the Year.

Do not miss your chance to see her take over The SSE Arena, Wembley in London on Tuesday 2nd of July. Tickets sure to sell quick so grab yours before they all go!

With a career that has spanned across six decades and seen her dominate the charts with such sublime rock, pop and disco hits as ‘Believe’, ‘Dark Lady’ and ‘If I Could Turn Back Time’, Cher is a true living legend.

Fans of the Goddess of Pop will be thrilled to hear that Cher is once again hitting the road to play the Here We Go Again tour. Commencing in October, you can see her make headlines appearances at The O2 Arena in London, Manchester Arena, Arena Birmingham and The SSE Hydro at Glasgow during October.

The musical is the true-life story of one of the greatest soul and R&B singers of all time and shows off her grit, determination and immeasurable talent. Turner is loved for releasing such best-selling singles as ‘Typical Male’, ‘Private Dancer’ and ‘Better Be Good To Me’ which have escalated her to the world stage and seen her sell over 200 million records.

Inimitable rapper \ singer Nicki Minaj is one of the biggest stars in the world today as shown not only by the five million albums sold worldwide but also her trophy laden mantlepiece which strains under the weight of six American Music Awards, 11 BET Awards, four MTV Video Music Awards, another four Billboard Music Awards and a Billboard Women in Music Rising Star Award!

This month, Minaj kicks off The Nicki Wrld Tour which allows her to show off her Top 10 album ‘Queen’ plus play her hits to adoring audiences. Originally a short story then adapted into the classic 1950 film; All About Eve stars Gillian Anderson as Margo Channing, the prominent yet aging Broadway star who is idolised by Eve Harrington played by Lily James who inserts herself in the glamorous life of the star and becomes a threat to her career and relationships. The accompanying score is provided by double Mercury Prize winner and multi-instrumentalist PJ Harvey.

All About Eve tickets are currently available.

Bristol festival The Downs features a fierce line up with such incredible headliners as former Fugee Ms. Lauryn Hill, the one and only Grace Jones, trip hop legend Neneh Cherry plus many more. Get your ticket now and look forward to all the action which takes place on Saturday 31st of August 2019.

“What if?” has always been a powerful question as it asks what daring possibilities could there be if we broke past convention. Taking the classic Shakespearian tragedy as it’s starting point, &Juliet sees the famed female protagonist simply put down the dagger and walk away from her star-crossed lover to find a life of her own. Pop anthems are joined by stunning choreography for a wild comic ride.

Still fresh from breaking out of out of Sheffield based partnership Slow Club, Rebecca Taylor has just released her first solo album ‘Compliments Please’ as her new project Self Esteem which is fast attracting critical acclaim with The Line Of Best Fit thrilled with her “far bolder” approach and The Skinny calling her “a remarkable vocalist and a powerful lyricist”. Finding that she was stifled as half a band with reduced by the ignorant to a mere face rather than possessing real talent, she has now found the creative freedom she craved and is proving herself as one of the most exciting new acts of 2019.