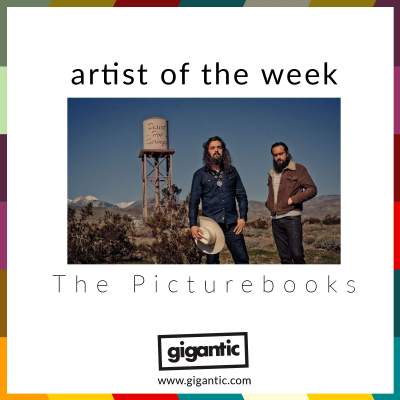 In the mood for some deep and dirty blues rock? Then The Picturebooks boys have got exactly what you need. When singer and guitarist Fynn Claus Grabke and drummer Philipp Mirtschink aren’t working as grease monkeys in their very own garage in Gütersloh, Germany; they’re exploring their passion for the sounds of the American South as an incredible two-piece.

First formed in 2009, Philipp Mirtschink and Fynn Claus Grabke teamed up with bassist Tim Bohlmann to play raccous indie and garage rock. They first began to impress with debut album ‘List Of People To Kill’ which they recorded and released within their first year as The Picturebooks. It would soon be followed by second album ‘Artificial Tears’.

However, the demands of the band were taking their toll and following the release of ‘Artificial Tears’ Bohlmann felt like he no longer wanted to carry on and left the band while Mirtschink and Grabke decided they had had enough and needed some time off. They selected to enter a hiatus, concentrating on their work as mechanics and working on bikes. Whilst getting their hands nice and greasy, they were able to get back to basics and rediscover their passions which would return them to music and lead them to start exploring southern inspired blues rock.

“Motorcycles saved our lives back then! They brought us back to music to be honest. After being a band for a long time—going through all kinds of stages career-wise—we reached a point where it didn’t feel right, and we felt the need to separate from it for a while. We kinda got lost in the desert, building and riding bikes. At home, we built a motorcycle garage next to our studio and we had a lot of time to think about music and the band and what we really wanna get out of it. It paved our way to where we are now.” – Fynn Claus Grabke

Fans were thrilled when Grabke and Mirtschink got back together to reform The Picturebooks and in 2014 they released their ‘Imaginary Horse’ record which signalled the start of a work hard/play hard mentality which saw them tour relentlessly and release a follow up LP ‘Home Is A Heartache’ in 2017. Within this time, they would play over 350 shows within just three years which really helped to hone their talents.

This year, Grabke and Mirtschink came back with their new LP ‘The Hands Of Time’ which is undoubtedly their best work yet. Their confidence boosted from having toured so hard, the pair were ready to really push themselves and develop their sound which saw them even handmake their own percussion instruments. Laying tracks down in their own studio and recording in the garage just next door, the tapes were mastered by Brian Lucey (Biffy Clyro, Royal Blood, Marilyn Manson) who helped them reach the creative heights they had hoped for and achieve a sound they felt was truly authentic to themselves.

“With ‘The Hands of Time’, we learned to utilize the studio as a third instrument. We learned how to translate the power and energy that we have on stage into our recording in ways we had never done before. We were still recording stuff in our chopper garage like on the previous albums, but this time we got a lot more into producing and songwriting. We had always wanted to incorporate more instruments than just drums and guitar, so you will hear piano, tubular bells, harp, mandolin, timpani drums, and a lot of self-made percussion instruments. Whenever we used something new, the main target was to keep our vibe and stay true to our sound aesthetic.” – Fynn Claus Grabke

See The Picturebooks play UK gigs in support of their latest album ‘The Hands Of Time’ during Spring 2020. Tickets are currently on sale with Gigantic, so grab yours right now!

The Picturebooks tickets are currently available.