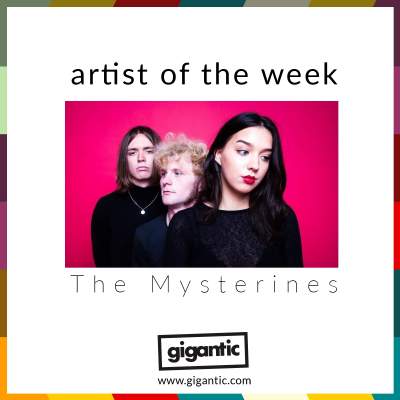 Bringing together elements of grunge, garage rock and pop punk; The Mysterines are the blistering hot new band from the North West about to become huge. The edgy three-piece includes the talents of drummer Chrissy Moore, with Lia Metcalfe taking on lead vocals and guitar plus George Favager playing bass.

The boisterous band draw influence from a wide sphere of alternative sound which inform their incredibly catchy songs with tremendous appeal that could easily see them become THE vital breakthrough band of 2020.

It’s been a huge year for rising alt rock stars The Mysterines. The band from the Wirral first started making waves around Liverpool after forming in 2018 which reverberated around the UK and led to an invitation to the fabled Maida Vale studio to record a BBC Introducing session which was released in January which revealed a band that was ready for the big time and demanding that they get there right now.

Their profile sufficiently raised, 2019 saw the trio ensure they took advantage of the growing interest and proceeded to gig heavily throughout the rest of the year. At some point, the found the time to return to the studio and this summer the band dropped their debut EP ‘Take Control’ through their own Pretty Face Recordings label which included the stomping titular single as the lead track. It was followed by the energetically charged ‘Hormone’, riotous song ‘Gasoline’ and ‘Bet your Pretty Face’ which is the explosive end the EP deserves. The busy twelve months also saw them team up with the likes of Brighton duo Royal Blood, Glaswegian two-piece Honeyblood and Reading rockers The Amazons supporting each band on major dates of their headline tours.

The flurry of activity continues as last week saw them release their brand new single ‘Who’s Ur Girl?’. Taking inspiration from David Lynch’s unsettling movie masterpiece ‘Blue Velvet’, the song has a suitably sinister feel as the lyrics flit from the perspective of the audience watching the cult film to that of central character Dorothy Vallens who is a radical reinterpretation of the femme fatale.

Continuing to ride the massive wave of momentum; The Mysterines now announce their very own massive headline tour for the new year where you can see your new favourite band smash it on a stage near you. Tickets are release at 10:00 on Friday, so make sure you set a personal reminder with Gigantic right now!