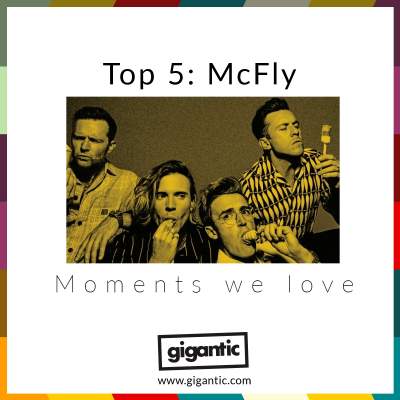 Earlier this year, pop punk fans were delighted to hear the new that’s their favourite band McFly were officially back! The boy band first formed in 2003 when Harry Judd (drummer), Dougie Poynter (bass), Danny Jones (vocals\guitar) and Tom Fletcher were just teenagers Danny Jones (vocals\guitar). They went on to enjoy an incredible career which saw them release such classic hits as ‘Lies’, ‘All About You’ and ‘One For The Radio’ and sell a staggering 2 million albums in the UK alone before decided to have a bit of a break in 2016.

Many feared they would never see the cheeky chaps on stage ever again but not only are they back with new album ‘The Lost Songs’ which includes never heard before tracks written back in the day – but they also will be headlining their very own huge tour during Summer 2020. To celebrate, we look at McFly's Top 5 Most Outrageous Moments!

When Charlie Simpson left Busted, not only did it break an entire generation of pop punk lovers hearts but it left his fellow band members James Bourne and Matt Willis stranded. Luckily, the McFly lads asked if they wanted to team up to form the McBusted supergroup!

The boys were asked to record an acoustic version of their b-side ‘Get Over You’ as an extra on their 2004 DVD. However, seems like the giggles got too much for the band as they just couldn’t seem to be able to harmonize on their own song – check out the video!