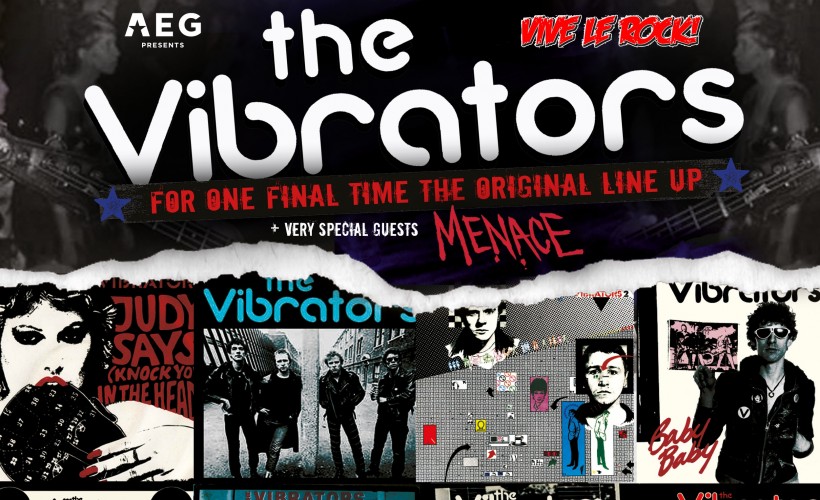 Catch The Vibrators take over New Cross Inn in London on Saturday 13th of June 2020.

As the excitement builds the word is spreading. We expect massive demand for The Vibrators tickets and so it is really important to act fast and book yours before they are all snatched up.

Fortunately, placing any orders for gig tickets with Gigantic is made easy as you can access our site 24/7 using your computer, tablet or smartphone whist relaxing at home or whilst out and about.

First wave UK punk band The Vibrators were formed in February 1976 by Knox (Ian Carnochan, 4 April 1945; vocals, guitar), John Ellis (b. 1 June 1952; guitar), Pat Collier (b. October 1951; bass), and Jonathan ‘Eddie’ Edwards (b. 1 April 1951; drums). Their first gig came as support to the Stranglers at Hornsey College of Art, before joining the Sex Pistols at the 100 Club during the summer of 1976. By September they were at the same venue supporting guitarist Chris Spedding (ex-Grease Band, and solo hitmaker for RAK Records). He helped to get the band signed to RAK and in November 1976 they released their debut 45, ‘We Vibrate’, which earned a New Musical Express Single Of The Week plaudit. At the same time they also released a single with Spedding called ‘Pogo Dancing’, a cash-in on the new dance craze. The Vibrators left RAK for Epic Records in 1977 to release their debut album, Pure Mania. Contained therein were the seminal Vibrator tracks ‘Whips And Furs’, and ‘Stiff Little Fingers’ (whence the Northern Irish band took their name).

Collier left after a tour with Ian Hunter and formed the Boyfriends, later enjoying a significant production career. His replacement was Gary Tibbs, whose CV would later include Adam And The Ants, Roxy Music, Mick Farren’s Good Guys and many more. In 1978, the Vibrators had their first UK Top 40 hit with ‘Automatic Lover’. It was followed by V2, produced by Vic Maille. Ellis left soon afterwards to play for Peter Gabriel, the Purple Helmets and the Stranglers. He was replaced by Dave Birch on guitar and the band’s sound was augmented by Don Snow on keyboards. Snow had formerly appeared with the Rezillos and Squeeze. The new single, ‘Judy Says (Knock You In The Head)’, became their second hit. Birch, Snow and Tibbs were the next departures and were replaced by Ben Brierly on bass and American Greg Van Cook on guitar. This line-up was short-lived, however, as Knox embarked on a solo career (it produced two good singles in a cover version of Syd Barrett’s ‘Gigolo Aunt’ and the poppy ‘She’s So Good Looking’). This signalled the end of the first phase of the Vibrators’ career, with Eddie going on to drum for PiL and the Inmates. In 1980, a new Vibrators line-up was formed with Kip (vocals), Jimmy V and Phil ‘the Birdman’ Ram (guitars), Ian Woodcock (bass), and the only constant - Eddie (drums). They released two singles before, once again, splitting up.

In 1982, the original line-up re-formed to record an album at Collier’s Alaska 127 studio. Since then the Vibrators have continued to tour (particularly on the continent) and record. There have been a few further line-up changes, the most significant being the departure of Pat Collier. His replacements were Noel Thomson, then Marc Duncan (b. 9 May 1960) from Doll By Doll. Ellis also departed to become a temporary then permanent Strangler. Mickie Owen (b. 3 March 1956) took over initially but was replaced in 1992 by ex-Members guitarist Nigel Bennett. Unpunked in 1996 was a surprisingly good album; the acoustic versions of their punk catalogue allowed the quality of the original songs to show through, and in many cases they were more convincing. By the late 90s the line-up of this durable band comprised Knox, Edwards and Robbie Tart.

Everyone is excited, and we at Gigantic expect our limited supplies of The Vibrators concert tickets to sell very quickly - so make sure you book yours before they all go!