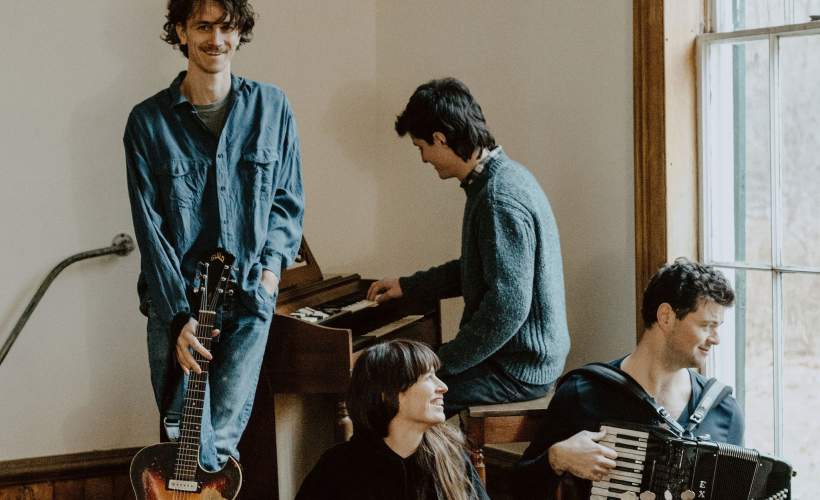 The Felice Brothers - Meadow Of A Dream

The Felice Brothers - Meadow Of A Dream

Their brand-new album Undress is out this year. They will be playing in the UK to promote the fantastic new release. Catch them at Cambridge Junction 2 on Tuesday 28th of January 2019.

We are incredibly excited to be able to offer you The Felice Brothers tickets, but we must also make you aware that the demand is sky high so you will have to book yours before they are all snatched up. Fortunately, placing an order for your favourite gig tickets is made easy with Gigantic as you can access our site from the comfort of your home or whilst busy and on the go using a computer, smartphone or tablet.

We know that it is easy to forget when your favourite act goes on sale. So, place a personal reminder with Gigantic and then we can alert you with a text message or an email just prior to their release at 09:00 on Friday 26th of April.


Self-taught group The Felice Brothers could not play any instruments before their inception in 2006 when they enterprisingly embarked upon busking in the subway stations of New York City. Rising in confidence and talent, they began to tour the country in their “Short Bus”.

They continued working in their DIY fashion and self-released their debut album Through These Reins And Gone in 2006 which was listed on Radio Woodstock WDST Top 25 albums for the year, followed by the album Tonight At The Arizona the next year.

The Felice Brothers were signed in 2008 and promoted the release of their eponymously titled album with extensive touring. Having label backing helped spread word of the band and their 2009 album titled Yonder Is The Clock rose to #20 in the Billboard 200. Their 2011 record did even better and hit #5 in the Billboard 200. Their albums have been featured in such prestigious publications as Esquire, Filter, The New York Times, NPR, Spin, Time Out New York and Uncut, to name a few.

With only limited supplies of The Felice Brothers concert tickets being made available by the promoters, you really will have to ensure you book early or will likely miss out.

Gigantic has a well-earned reputation for having a wide selection of the best gig tickets, and with an excellent customer services team on hand to help with your every enquiry, you know we are the very best place to come and book for your big night out. No wonder we won the Nottingham Posts illustrious ‘Retail Business of the Year award!

The Felice Brothers are a close-knit band consisting of brothers Ian and James Felice alongside their friend Joshua Rawson, fiddle player Greg Farley and drummer Dave Estebrook. They are self-taught, not one of them played an instrument prior to the band’s inception in 2006 when they started busking in New York City subway stations.

Previous albums have been featured in Esquire, Filter, The New York Times, NPR, Spin, Time Out New York and Uncut, to name a few. The Felice Brothers have recently toured with The Killers and Mumford & Sons and made appearances at Newport Folk Festival, End of The Road Festival, and Bonnaroo. The Felice Brothers' new album will be released Summer 2014 on Dualtone Records.

Having sold out The Lexington, The Felice Brothers will return to London in September to play The Forum.

Related to The Felice Brothers