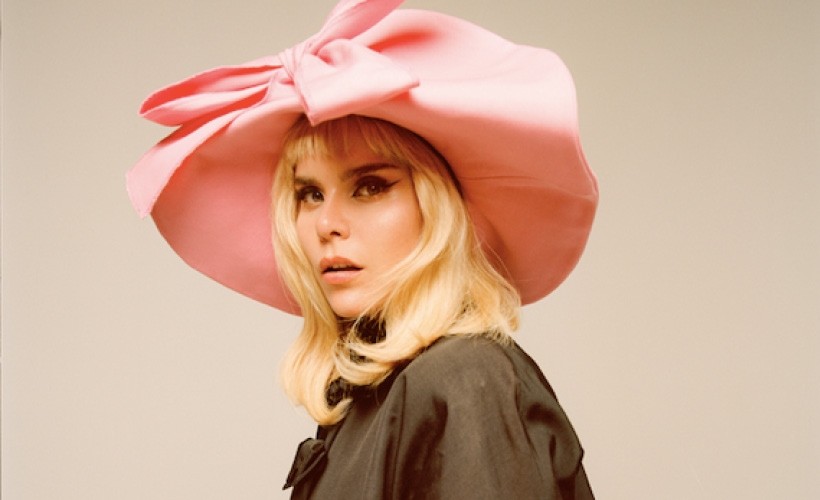 The concert was great but the organisation of parking was awful. No one we spoke to had a clue! We upgraded to hospitality, which when we eventually got in was great but on arrival nobody could tell us where to go for the suite!! Many of us were just left wandering aimlessly aroundle, terrible!

"sunshine in the rain"

Great venue.
Golden circle tickets made sure you were very close to the stage.
Car park was easy to get in and out of.
Even if you weren’t in Golden circle area the screens were excellent.
Even the rain didn’t dampen people’s spirits.

Paloma put on a great show in very testing conditions, we hope there are more concerts staged at the racecourse

Weather didn't help sound at all. Sound kept disappearing and didn't appear to be adjusted by sound crew.

Tweet
Double platinum and BRIT award-winning artist Paloma Faith will embark on a huge UK summer tour in 2022 that kicks off in Edinburgh in June. Tickets are available to buy Friday 15th October.

The extensive 23 date tour will run throughout June, July and August 2022 and will see Paloma play a number of fantastic outdoor locations including cricket clubs, city squares, parks and racecourses as well as a handful of indoor venues in cities and towns she has not visited for a number of years.

Talking about the tour Paloma said, "I've been touring my recent album Infinite Things and it's been so invigorating seeing everyone out on the road around the UK. I've loved playing live again and I am beyond excited to announce my Summer 2022 tour. I love nothing more than singing for you all and hearing you sing back to me. There’s nothing like it.”

Performing an array of hits from her extensive and much loved repertoire. These homecoming shows will have fans singing along to classics such as “Only Love Can Hurt Like This” and “Lullaby” as well as new songs from her fifth studio album “Infinite Things”.

It’s been a busy year for the singer with Paloma releasing her BBC documentary ‘Paloma Faith: As I Am’ earlier this year which received praise from critics and fans for it’s insight into the pop star's life and frank discussions around motherhood. She also entered the world of interior design with the launch of her Paloma Home collection as well as filming season 3 of Pennyworth and the prequel series to Stephen Fears’ movie Dangerous Liaisons.

The summer 2022 tour will feature songs from her most recent album ‘Infinite Things’ as well as all of her hits. Tickets for the tour go on general sale on Friday 15th October.

We are incredible excited to be able to offer you Paloma Faith tickets, but we must also make you aware that the demand is sky high so you will have to book yours before they are all snatched up. Fortunately, placing an order for your favourite gig tickets is made easy with Gigantic as you can access our site from the comfort of your home or whilst busy and on the go using a computer, smartphone or tablet.

With an acclaimed number one album The Architect riding high in the charts and a Brit nomination under her belt for Best Female Artist, Paloma Faith has announced she will perform in Vivary Park as part of her must see 20-date The Architect Summer Tour.

The singer will be entertaining crowds outdoors under the Somerset stars, when she takes to the stage on Friday 13th July at this summer’s Live in Somerset’s series of musical concerts.

The tour follows the release of Paloma’s new album, The Architect - her first in more than three years. With sales approaching 250,000 copies, it features the stunning singles: Crybaby, Guilty and her latest hit Till I’m Done.

Speaking about her upcoming summer tour, Paloma Faith, who is nominated for the Best British Female Solo Artist at the Brit Awards in 2018, said:

“Touring for me is the best thing, which is the reason why I do this job. I’m excited to be performing this summer and headed outdoors to venues including Taunton’s Vivary Park.

“I’m working out my set for the shows at the moment, and whilst it’s not been finalised, what I will say is that I would expect there to be a more futuristic feel to the shows.”

“Paloma Faith is captivating live. Her concert is going to be breathtaking and we hope you can join us, to hear one of the UK’s best female artists live under the stars in Somerset.

“It’s going to be an exceptional evening and a great series of live musical concerts.”

As there are only limited supplies of Paloma Faith concert tickets being put on sale by the event organisers, we really do urge you to act quickly and book yours before they are all gone. Last year saw Gigantic take home Nottingham Post’s their illustrious ‘Retail Business of the Year’ award, and with even bigger things planned for the new year you know we are the very best place to come whenever you are planning your big night out!

Paloma Faith on sale with Gigantic!

Get your hot tickets for Paloma Faith!

Gigantic has your tickets for Paloma Faith!

Tickets for Paloma Faith are available with Gigantic.

Make sure you get tickets for Paloma Faith with Gignatic