Few bands have had enjoyed the success, influence and sheer adoration of Oasis. Hailing from Manchester, this iconic act helped to transform the landscape of British rock.

The group formed in 1991 and initially comprised Liam Gallagher on vocals and tambourine, Paul Arthurs on guitar, Paul McGuigan on bass guitar and Tony McCarroll on drums. However, they would soon be joined by Liam’s older brother Noel on lead guitar and vocals. During a show in Glasgow, the talented five-piece were spotted by the founder of Creation Records Alan McGee, who offered them a contract immediately.

In 1994, they were transformed into overnight stars with their first album ‘Definitely Maybe’. With clear hints of the Beatles and psychedelic pop, the LP immediately struck a chord with music lovers and it became the fastest-selling debut album in British history at the time. The record, which featured the classics tracks ‘Supersonic’ and ‘Live Forever’, went on to be certified seven times Platinum and it sold over eight million copies globally.

Just a year later, Oasis released their second album ‘(What's the Story) Morning Glory?’. Now widely considered to be a seminal record of the Britpop era, it boasted iconic tunes including ‘Wonderwall’, ‘Don’t Look Back in Anger’, ‘Some Might Say’ ‘and ‘Champagne Supernova’. Selling nearly 350,000 copies in the first week alone, it spent an impressive 10 weeks at number one in the UK Albums Chart.

There followed three more albums, ‘Be Here Now’ (1997), ‘Standing on the Shoulder of Giants’ (2000) and ‘Heathen Chemistry’ (2002). Then, in 2004, Oasis were joined by The Who’s drummer Zak Starkey and the following year released their sixth studio LP ‘Don’t Believe the Truth’, which went triple platinum in the UK. This fuelled interest in the band once more and led to a resurgence in demand for Oasis tickets. The Oasis tour that followed included a host of sell-out shows, including performances in New York’s Madison Square Garden and LA’s Hollywood Bowl.

After releasing a compilation album entitled ‘Stop the Clocks’ in 2006, the group received a BRIT Award for their outstanding contribution to music and, in 2007, their seventh studio LP ‘Dig Out Your Soul’ reached the top of the charts in the UK and hit number five in the US Billboard Top 200.

Fans were treated to more Oasis concerts in 2009. However, the band, renowned for their backstage bust-ups, finally fell apart that summer when Noel announced he was leaving. Although this spelled the end of Oasis tour dates, the remaining band members continued working together under the name Beady Eye, while Noel embarked on his solo venture with Noel Gallagher’s High Flying Birds.

Bonehead from Oasis is hosting a Listening Party of their classic album ‘(What’s The Story) Morning Glory?’ 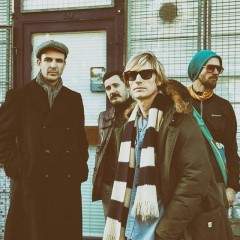 That's all we have for Oasis! Check out their upcoming shows