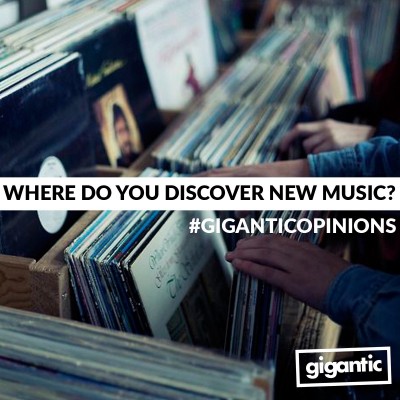 Everyone has their favourite bands, singers and DJs but Gigantic wanted to know; “Where do you discover new music? So, once again, we took to Twitter under #GiganticOpinions to find out where you first hear your new favourite thing.

TALKING POINTS // We would like to know where you discover your new music? 🎧

Traditionally, the British music press has been the fountain of all knowledge and enjoyed a dedicated and loyal readership. Until the turn of the millennium, acts from outside Britain marvelled and were bemused in equal measure at this stranglehold which could make or break an act. However, this has declined significantly as the internet has become more synonymous with our daily life.

Perhaps the most telling sign of this came with the recent announcement that the NME will no longer be published in a physical format but will continue online only. Some say this is indicative of the decline in quality of the paper’s journalism, but those three little letters will always mean something special to its readers between the 70’s and 90’s. Especially to Rob McCleary, guitarist in critically acclaimed shoegaze band Stereopium.

Until last week I religiously had a copy of @NME every week and I still think the print magazines such as @diymagazine are a great filter for good music. I also listen to the alternative playlist on @iTunes which is updated every week. Also, support bands at gigs obvs 👍🏻

The advent of the web has suddenly given first time writers potential access to an international audience. And by removing expensive overheads such as printing and distribution whilst also being able to offer videos, interactive debate and instant new updates, up and coming writers are able to truly shine in a realm they may have previously have been barred from due to the expense.

Mirroring the fanzine revolution brought about by punk writers of the 70’s whilst also being able to easily achieve the high-quality gloss of a magazine, music sites are able to give a true and independent critique which is free from the pressures of big business. We heard from Dom Gourlay, music journalist for Gigwise and Drowned In Sound whose articles often champion new music.

Drowned In Sound and Gigwise obviously 😄

Apart from the obvious there's no agenda, no link to labels or PR companies, and a distinct DIY labour of love ethos from editorial level to the writing team.

There is a huge range of excellent music websites including Louder Than War which is ran by award winning journalist and previous Talking Points contributor John Robb. Also, among our favourites are DIY, CLASH, Noisey and Pitchfork. Let us know some of your favourites in the comments below!

But it isn’t just websites that changed everything, so did social media. Facebook, Twitter, Instagram and more took the original word-of-mouth and stretched it to a truly global extent with users being able to share their own videos, photos and recommendations to the whole world from their smartphone. Illustrator Amanda Wright of Amanda In A Teacup is a keen proponent for the potential social media has for rising stars to rapidly reach new audiences or learn about new music from online grassroot sources.

Most of my new music comes from recommendations from blogs/tweets or from my friends, or I will hear something on a tv show or film or something referenced as an inspiration for some music by one of my favourite bands - Netflix music documentaries too

Gigantic also recognises the power of social media and blogs and we love being tagged into your pics and posts to share in your experiences with #GiganticGigGoer. Make sure you check out our weekly blog On The Radar which not only recommends the very best new music, but also offers you the chance to see their latest videos, hear their hot new sounds and get your hands on the tickets you need so you can check them out for yourself.

We had a great response to #GiganticOpinions on our own Instagram page where renowned Nottingham based tattoo artist Ash Draycott / losthopetattooer commented; “YouTube! It’s brilliant for finding new tracks!”

TALKING POINTS // We would like to know where you discover your new music? 🎧 • Tell us your favourite blog - magazine - vlog - fanzine + sites 💙 • #GiganticOpinions #GiganticTickets #NewMusicFriday

Radio has always played a big part in helping new acts reach a new audience. From the hollowed evening sessions of John Peel of the past to the cutting-edge acts being pushed by BBC Introducing, the airwaves have always been one of the most immediate ways of audiences hearing an exciting new sound. Digital and internet radio has led to the creation of some truly special stations which are able to wander far from the mainstream and give the truly alternative a chance. Gigantic has BBC 6 Music playing in our offices and we know that many of you are also avid listeners.

Indie rock band La Bête Blooms have frequently benefitted from prominent airplay from BBC Music. Recently they have released their infectious krautrock inspired single 'Take Arms’ which you can hear HERE. Their singer Daniel Mawer enthuses about the potential for streaming and internet radio as a brilliant source of new sounds.

All these sources are an excellent way of discovering new music, but they are all dependent on someone else’s recommendation based on their own tastes. Ultimately, the best way to discover the best new music is to actually go out and find it for yourself! So, support your local venues and make sure you regularly attend their gigs where you will hear the future big thing first.

Festivals always offer many different acts and you might just discover your new favourite whilst deep into a big weekender. Gigantic always has a wide selection of festivals for you to choose from which you can browse right HERE. Plus, we have tickets for new events being added everyday so stick with us to discover the best new music.