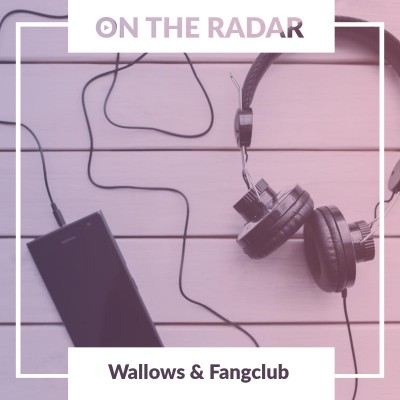 Darting from post punk via emotive soundscapes to slacker rock, the constant re-invention and expansion of Wallows sound is relentless. The LA three-piece Braeden Lemasters, Cole Preston and
Dylan Minnette have been slowly building a following with a succession of highly impressive yet assorted string of singles to become what they describe as ‘an overnight sensation that took almost 10 years’.

“We don’t have any particular musical style. We incorporate whatever we happen to be listening to and are inspired by. It all depends on what the song requires.”

Despite veering wonderfully in sound, themes of yearning, optimism and coming-of-age remain a consistent throughout their music and Wallows have been gathering a dedicated international audience through their critically acclaimed singles ‘Pleaser’, ‘Sun Tan’, ‘Uncomfortable’ and ‘Pulling Leaves Off Trees’ throughout 2017.

They have been quick to return this year with infectious indie dancefloor filler ‘Pictures Of Girls’ and the newly unveiled ultra-chill track ‘These Days’ which they have just begun streaming. Both are taken from their forthcoming debut six track EP ‘Spring’, which is produced by Grammy Award-winner John Congleton (Brian Wilson, St. Vincent, The War On Drugs), the EP is expected to be wonderfully eclectic and show off their wide range of influences.

“We want to continue being unpredictable with our sound, keep our fans guessing. We wanted this EP to sound like a progression.”

Wallows had already announced a major London show taking place at Hoxton Bar & Kitchen. But after massive public demand, they will also play a second date in the capital at Queen Of Hoxton. Tickets are selling fast so grab yours before they are all gone.

What happens when an underground band signs to a major label? That is the question currently facing grunge band Fangclub.

Progressing the Seattle sound invented in the late 80’s, Dara Coleman (Drums), Kevin Keane (Bass) and Steven King (Guitar / Vocals) layer up their scuzzy guitars with orchestral strings which convert their angsty lyrics from mere insecure self-introspection in the garage to something truly epic in scale.

Formed in 2013, Fangclub grew out of the frustrations of schoolfriends Keane and King who grow up in the small seaside town Rush, County Dublin. The band was completed upon a chance meeting of Coleman at a house party after being previously unhappy with a number of drummers.

Despite having limited access to resources, the trio recognised the importance of getting into the studio to grab attention. Relocating to the village Ballyheigue, they would record over twenty-five tracks leading to their debut EP ‘Bullet Head’ in 2015.

“We put every penny we had together. There was this house with a tiny studio attached to it in Kerry, Ireland, and we went and lived there and recorded there. We lived on tins of beans and spaghetti, and lived out of each other’s pockets. And then we left with this record of songs and it was like ‘Okay, now what?’” - Steven King

Their efforts had almost instant results with the band being summoned by the Irish team of Universal Music who signed Fangclub and pushed them to rapidly release a second EP ‘Coma Happy’, which was largely taken from the Ballyheigue sessions.

“We thought it was a joke, to be honest. We really didn’t believe them until we were in the offices having discussions.” - Steven King

With both band and label happy with the publics reactions, Fangclub returned to the studio amidst prominent festival slots and supporting the likes of Pretty Vicious and Twin Atlantic. Benefitting from being able to now access bigger a bigger studio with better equipment, the revisited some of their more popular songs which they were able to flesh out and combine with new material to produce an eponymously titled debut album which they released last year.

So, what does happen when an underground band signs to a major label? They get the chance to truly shine and are provided the reach to the wide audience they truly deserve.

Fangclub have just released their brand-new single ‘All Fall Down’ as they look to the future. This year sees them hit the UK and you can catch them on tour in Spring.

Fangclub tickets are released at 10:00 on Wednesday.