Talking Points - Should Mobile Phones Be Banned From Gigs? 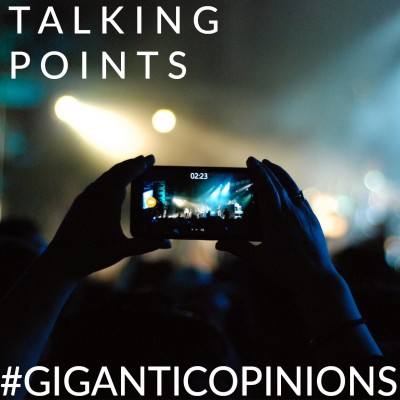 Should Mobile Phones Be Banned From Gigs?

Everyone has had it happen at some point or other. You have spent your hard-earned cash to see your favourite band and some idiot is constantly blocking your view in a desperate bid to try and get a photo on their phone - some even think it is a good idea to try and capture the whole show in a single video using their tablet!

The result is stale gigs as vainglorious idiots kill the atmosphere waving around expensive bits of plastic, distracting from the spectacle on stage and risking getting your eye poked out with a selfie stick all for the sake of showing off that they were there.

Plus, many acts such as comedian Chris Rock, Mumford & Sons plus many more have expressly made vocal their concerns citing a loss of income through bootlegs or an infringement of their intellectual property in addition to just being generally annoying.

And let’s face it, in the throng of a big sweaty crowd with people jostling one another, are you really going to get a shot that is anything other than a wiggly mess or a 59 second out-of-focus video of the singer’s feet as the music plays too loud for your tiny microphone to handle?

Is it not better to leave the camera work to the actual photographers who are skilled at doing their job who are using far better equipment? Arguably, each one of your snaps is devaluing their professional work which you can enjoy the benefit of afterwards through various media leaving you free to truly embrace the moment.

On the other hand, it can be said that personal photos and recordings are an essential part of fan culture. Surely those who have queued all day to ensure their place at the front have a right to take a photo or two of their hero on stage?

Certainly, it is through their loyal following plus purchases of music, merchandise and tickets that provides the performer the money to appear on stage. Who are they to then make the stroppy demand of “No Photos Please”?

Also, it is through Instagram, YouTube and Twitter fans sometimes capture those rare moments that can be hilarious, touching or truly special. Whether it be Harry Styles slipping on a kiwi, Coldplay assisting with a surprise proposal or when Green Day invite fans to join them on stage to come play.

And then, above all, there is the question of practicality. Is it even possible to implement a ban without an impossible level or organisation that would cause massive delays on entry? Furthermore, would you be comfortable handing over your smartphone to a complete stranger, especially if you need it to stay in contact with work or family – never mind the legal issues that arise from denying someone the right to document their own experiences.

So, what do you think? Should mobile phones be banned from gigs to stop from ruining the atmosphere or is it just part and parcel of the way we interact act gigs? We want to hear from you, so let us know your opinion in the comments below!