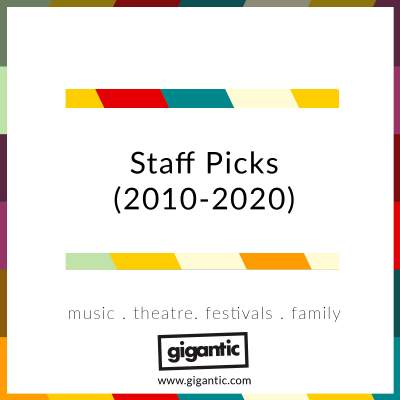 We’ve been sending emails around the office to find out our fav pics from the past ten years. Keep scrolling to discover what we have been enjoying this decade – plus comment below to let us know what you have been listening to!

The Wonder Years – No Closer To Heaven

PUP – The Dream Is Over

Menzingers – After The Party

“This album is just everything I love rolled in to one; amazing guitar work, cool songs and those early 70s vibrations seeping in through the acetate trees on the sleeve.  Ryley’s voice soars on the title track, and some raw, rugged emotion comes through on tunes like Sullen Mind & Summer Dress.  Plenty of nods to John Martyn & Van Morrison make this a sure-fire one to bring a smile every time I put it on.  Another amazing ability of this guy is that he always manages to surround himself with incredible musicians, this record’s no different.  It goes from Bert Jansch-esque solo guitar to freak-jazz-psych-rock, what’s not to love?! Something different in the singer-songwriter genre to what had been expected over the past 20-30 years or so in my humble opinion.  Texturally it’s a very tasteful throwback indeed that still oozes originality.  It’s not necessarily his best record, but I love it!”

Kendrick Lamar – To Pimp a Butterfly

LCD Soundsystem – This is Happening

“The decade has produced some incredible albums, including David Bowie’s brave and unnerving exploration of his own legacy pending his death on ‘Blackstar’, Warpaint’s magnificent eponymously titled second LP, the bitter DIY resentment of Sleaford Mod’s ‘Divide and Exit’ plus Savages caustic debut ‘Silence Yourself’. But my favourite album of the past ten years has to be Manic Street Preachers’ ‘Futurology’. Rather than lambasting everything they are against or wallowing in despair, the Manics instead decided to explore the European artists and cultural movements which inspire them through their own unique synthesis of postpunk and krautrock.”

“It’s impossible to pick fave song in 10 years, however Jimi Mack – ‘Soon’ is definitely in my selection, because its completely perfect and sang by my best friend, about my best friend ❤”

“It’s supposed to be a song about stagnant song-writing, but I interpreted it more with my mental state at the time of its release; living in a damp attic!  ‘I’m tired of my mind getting heavy with mould’.  It’s the most uplifting, hopeful tune that’s resonated with me in the past 10 years!  Hayley’s great when it comes to tender songs with her powerful yet nimble vocals, but this is a really simple, driving song that just beats the message into you. I saw her at Green Man 2018, with her new 12-string guitar. It was probably the most endearing performance I’ve ever seen, and this tune rang in my ears for months after & sent me beaming. If you’re in a funk, get this on & sing along, it’ll perk ye up!”

“I’m a sucker for any song with themes centred around nostalgia, melancholy and lost potential. On her powerful single ‘Kismet Kill’, songwriter Haley Bonar sings of wasting the fleeting days of youth and wilting beauty to be replaced by adult anxiety made all the worse by the memories of vanity. Add a little understated lead guitar with the chorus pedal whacked right up to accompany a resigned matter of fact vocal delivery and I’m happily drowning in the misery.”

“I was very hungover on the Mountain Hill on Green Man 2018’s Saturday, when (Baxter Dury) took the stage.  Admittedly, his tunes had wound me up a little on the radio at work but he completely won me over!  Such an amazing stage presence even though he was miles away from me.  The way he engages, the way he moves, so assured of himself.  Brilliant.”

“Also, Fantastic Negrito. I was just downstairs having a beer at The Bodega & my friend asked me to come up & check this band out with him. So glad I did, one of the best shows I’ve ever seen!”

“Favourite performer is LG for me as always, but to me there is nobody better 😊 his comeback over the last few years has been incredible, last great rock n roll star! I think he should try stand-up comedy too ha.”

“While many might consider them a definitive 90’s band, Suede had truly fizzled out owing to the very drugged up excesses they sang about. So, it was a real surprise when Brett Anderson was able to clean up and find a new more mature direction for his band in the form a triptych of albums; ‘Bloodsports’, ‘Night Thoughts’ and ‘The Blue Hour’. The renewed creative impulse brought with it tremendous energy which has translated into shows wilder than acts less than half their age.”

“I have two, The Stone Roses in Manchester, first time seeing them & they were mind blowing, the atmosphere to I wanna be adored I will always remember. Liam Gallagher in Finsbury park, was the middle of summer with all my friends in Finsbury park singing along to octopuses garden by the Beatles ❤ Finsbury park was also my favourite time I ever saw Oasis so held good memories for that!”

“Tame Impala at Alexandra Palace 2016 : A magical show in a magical venue.  It was my first time seeing them, Currents had been everywhere for months.  A great daytrip with a big bunch of friends, topped off with a surreal performance.  The confetti, the lights, the atmosphere – just incredible!”

“I have always been slightly sceptical of Glastonbury, thinking it was just a bit of a posh playground for people more bothered about muesli than good music. However, I found myself at Worthy Farm in the summer of 2019 and was blown away with the constant high quality of acts playing. Loved seeing The Cure, The Big Moon, Self Esteem and it was a real honour to be brought on stage by Joe Talbot of IDLES during their second set found amongst the hedonistic quarters of Shangri-La.

And I was truly touched when indie icons Ash paused their set a The Leadmill in Sheffield and lead the crowd to sing happy birthday to me on 10/12/2015. Was a total surprise and very special.”

Jimi McBride – Event Manager : Do Nothing

“There’s only one answer.  Simply the best!  Listen to ‘Gangs’/’Waitress’/’Handshakes’ and tell me they’re not the best new band you’ve heard in a long time, I dare ye!”

“If there has been one band that has truly arrived in the past ten years, then it has to be IDLES. Leading the charge for the return of political punk, their aggressively positive stance has united the generations and made them the most important British band.

The past couple of years have thrown up some incredible new bands such as no wave wailers Happy Couple, Hull based indie kraut rockers Low Hummer and the dark synthpop of Working Men’s Club which all promise to become essential bands over the next ten years.”