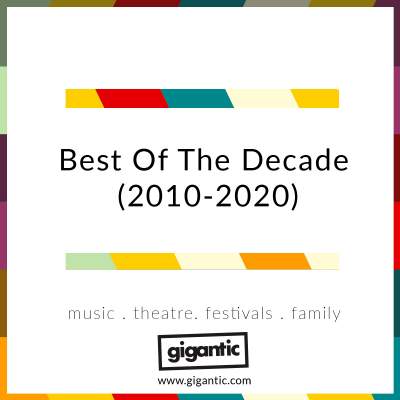 We are passionate about music and the past ten years have brought with them some monumental changes in music. We have seen the birth of new stars, truly special gigs and festivals plus the release of some truly epic records. Let’s cast our eyes right back, starting from 2010 to the present day and celebrate all the best that the decade has brought.

Childish Gambino – ‘This Is America’

As the Black Lives Matter movement grew in intensity, the silence from US artists was deafening. That is until Childish Gambino (Donald Glover) dropped ‘This Is America’. A bitter insight to the racism, mass shootings and police brutality which has become normalised, put to trap and accompanied with a truly remarkable video.

Robyn – ‘Dancing On My Own’

Whether you want to get the party started, deal with heartache, feel empowered, hit the gym or just need a tune to play whilst getting all your jobs done – Swedish singer Robyn’s ‘Dancing On My Own’ is perfect banger for all occasions!

In the summer of 2010, Facebook reached 500 million users worldwide and social media tipped over from just a fad for teens, students and 20-somethings to becoming a permanent extension of every aspect of our lives. Sri Lankan Tamil producer, rapper and activist M.I.A. (Mathangi Arulpragasam) examined the online sexualising of young girls and how they were isolated and prayed upon through direct messaging in her fierce tribal techno cross over ‘XXXO’.

Lady Gaga (Stefani Germanotta) had already become an international pop phenomenon with the release of debut album ‘The Fame’ three years earlier, but in she came back with stunning second album ‘Born this Way’ in 2011 which shot to the top of the charts all around the world. Deliciously garish and wonderfully OTT, it would sell over 6 million copies and become THE gay rights album of the decade.

Just when you thought you had heard everything indie icons Arctic Monkeys had to offer, Alex Turner and his merry band went and flipped the table and came back with their psychedelic lounge pop masterpiece ‘Tranquility Base Hotel & Casino’. Produced by long term collaborator James Ford, with themes of politics, consumerism and the effects of technology within the setting of a holiday destination in space it feels more like a Stanley Kubrick concept album than anything the Sheffield lads had released before.

Parisian electro androids Daft Punk have long proven to be the absolute pinnacle of disco, bringing dance to the mainstream since they appeared in the late 90’s. But in 2013 they took it to the next level, teaming up with a huge roster of a-listers including Julian Casablancas, Chilly Gonzales, Nile Rodgers and Pharrell Williams to scoop up a staggering five Grammy Awards. Nowadays, it’s almost impossible to imagine there was a time when you could have a wedding reception without ‘Get Lucky’ playing.

Before the release of Ed Sheeran’s debut album ‘+’ in 2011, he had been busking, playing pubs and trying to release records independently. Fast forward to today and he’s rubbing shoulders with the likes of Taylor Swift and Wayne Rooney, taking home Grammy Awards, starting his own record label and writing tracks with the likes of Justin Bieber and Skrillex – he’s even had his name on the bottle of Heinz Tomato Edchup (geddit!). There can be no doubt he’s one of the biggest success stories of the decade!

Stormzy (Michael Ebenazer Kwadjo Omari Owuo Jr.) first broke out of the underground in 2014 when he won Best Grime Act at the MOBO Awards – by 2019 he was the first black solo artist to headline Glastonbury! Leading the rise of grime from the street of South London to the national stage, he became the voice of young black Britain. Unafraid to use his voice and get involved in politics, he has led the way encouraging young people to register to vote seeing a huge spike of 351,000 applications before the deadline for the 2019 general election and in 2018, he gave a truly powerful live performance at the Brit Awards in tribute to the victims of the Grenfell fire tragedy after winning best British album of the year with ‘Gang Signs & Prayer’.

The road to success has not been a short one for politically charged post punks IDLES. The boys from Bristol had been largely ignored and disparaged by the music press, until the release of their debut album ‘Brutalism’ a good eight years after they formed when they suddenly started attracting praise from the likes of Steve Lamacq. By the time second LP ‘Joy As An Act Of Resistance’ came out in 2018 they were a genuine underground movement which burst out at Glastonbury Festival this summer to make them Britain’s most vital band.

Who knew that the next big thing would sort of be the old thing? Conjuring shades of faded 60’s glamour and the Hollywood heydays of yesteryear, Elizabeth Woolridge Grant became melancholic pop phenomenon Lana Del Rey selling over 5 million singles in the UK alone with her YouTube and Vevo combined views reaching a mind boggling 3.5 billion.

Do you know what real star quality is? It’s playing to huge crowds and making every single person in the audience feeling like the person on stage is singing just to them. While there can be no doubt that Adele is one of the biggest British exports since Marmite, she’s never lost that girl-next-door side of her personality which makes her so appealing and her shows so special. The past ten years have seen her truly establish her household name status and play packed out venues, including Royal Albert Hall, all over the world. To top it off, she’s been named in Time Magazine’s list of the 100 Most Influential People – twice!

Once upon a time, Muse were an unassuming three-piece from Teignmouth who were able to pull off a pretty convincing imitation of Jeff Buckley. Nowadays, they’re packing out arenas all over the world with increasingly more epic (and bizarre!) productions to accompany their conspiracy ridden space rock! Last year, even singer Matt Bellamy wondered if they had gone too far with their Simulation Tour which boasted a brass band, BMX stunt riders, dancers, huge high def screens, more lasers than Star Wars and – of course – a giant LED clad robot!

While the other Gallagher brother seems to be becoming more and more grumpy, Our Kid has his finger right on the pulse of what his fans want. Capturing the rebel spirit of Oasis but continuing to create new material, he has inspired a new generation on stage and through Twitter. When Manchester fell victim to a terror attack, he lit 22 candles in tribute to the victims and flew home from Germany to play to the people he loves. Other special shows throughout the decade include appearing on the Pyramid Stage at Glastonbury, playing MTV Unplugged at Hull City Hall and pranking his fans at Arena Birmingham with a surprise encore after everyone thought he finished. His legacy will live forever – no wonder NME handed him their Godlike Genius Award last year!