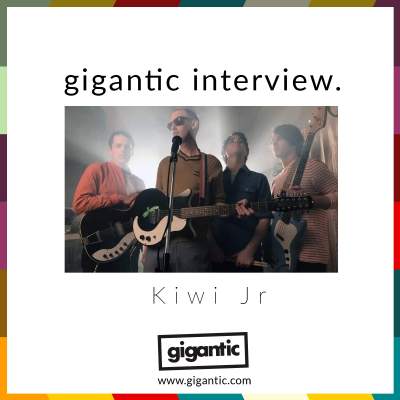 Though the name Kiwi jr. might not sound definitively Canadian, the delightful Toronto based band have ultra cool indie songs that bleed pure maple syrup.

Next year sees the release of debut LP ‘Football Money’ on MINT RECORDS which saw them joined by Graham Walsh from Holy Fuck as producer and Aaron Goldstein taking on engineer duties, both of whom were able to channel the party vibes of two years into a future classic jangly indie pop masterpiece.

Kiwi jr. spoke to Gigantic ahead of their UK headline dates about the upcoming release of their first album ‘Football Money’, plus what they have in store in the coming new year.

How did Kiwi Jr. first get started?

Last ditch effort to make rock music before we turned thirty, as nobody wants to hear what four old chunks of coal like us have to say about music that is essentially for the kids. Bill Haley was 30 when kids were tearing up their seats to Rock Around the Clock, but he wasn’t competing for college radio slots against 17 year olds from Bed-Stuy putting up new songs on Soundcloud every week.

You’re getting quite a buzz from the press. Is receiving a positive critical reaction important to you or are you more interested in allowing your music to speak for itself?

Of course, press is good, and positive press even better. There are currently four-hundred and seven indie rock bands with vintage amplifiers in the Greater-Toronto Area alone, so every little bit of buzz is important to stand out.

It’s been a big year for music with some great records released during 2019. With only a couple of weeks left, can you tell us what your favourite albums of the year have been?

‘Everybody Split’, is a great record by the Australian band Possible Humans. This came out on Trouble in Mind this year, it’s fast, melodic, bits of early REM and the Buzzcocks. The latest Bill Callahan and Purple Mountains albums got a lot of plays. Punk by Chai came out at the start of 2018 was really hot too – they were maybe the tightest act I saw this past year.

‘Football Money’ is the culmination of two years’ work. What can you tell us about how it will sound?

It’s a party record for the most part - it sounds loud, raw. Graham plays keyboards in the band Holy Fuck so he added a couple of blips and bloops, but really there aren’t a lot of overdubs. It’s a guitar record by a guitar band.

Your first full length record includes the single ‘Leslie’ are they a real person? Tell us the story behind the song.

The story is of somebody leaving a New Year’s Eve party in the middle of the night and nobody ever seeing them again. It’s a 2-minute mystery story. I think there needs to be more storytelling in rocknroll songs. You used to see it a lot more - Rocky Raccoon, Lola, Killing of Georgie. Bring it back! At least make something interesting for people who don’t care for the melody to bite into – make them stick around to hear the ending.

Are you happier as a band playing on the stage or hidden away in the studio creating new material?

We don’t have the privilege to “hide away” in a studio for very long. If we’re in the studio it’s pedal to the medal, stressed, no sleep, trying to get our money’s worth. It’s fun to look back on, but I wouldn’t call it a “happy” time, at least not in a Pharrell sense of the word.

You have been confirmed to play SXSW 2020. Looking forward to getting weird in Austin?

I’m not totally sure what that means in 2020, but we’re excited to go and maybe get some free sneakers out of it.

Can we expect to see Kiwi Jr. playing any UK festivals next year?’

If we aren’t announced as headlining the mainstage at Glastonbury within the next six weeks, we expect the kids to riot in the streets – give the people what they want!