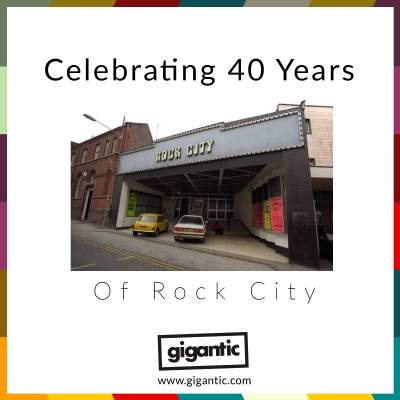 For 40 years, Rock City has been an iconic landmark for all those who love to mosh. Situated in the very heart of Nottingham, the legendary venue is considered hallowed ground by bands and performers having previously played host to the likes of U2, R.E.M., Oasis, The Smiths, David Bowie, Guns N’ Roses, Nirvana, The Cure, Ed Sheeran – the list goes on and on!

While the infamous sticky floorboards may have finally been replaced, gig goers still cherish the venue for being able to see major names, cult icons and those on the rise in a relatively intimate setting. And after the stars have cleared the stage, there is always an amazing Club Night to drink and dance late into the night.

It’s not just Rock City that is celebrating their 40th birthday; premier punk bands New Model Army, The Damned and Bad Religion have all also reached their ruby anniversary and will be celebrating with their own individual headline dates.

Plus, the rest of the year sees a huge range of word class performers grace their main stage including Ash, Louise, Levellers, Big Thief, The Dualers – and even Kiefer Sutherland!

You can see our complete listings for Rock City HERE.

Gigantic loves Rock City and we can’t wait to see you down the front at all these amazing gigs in the year ahead. Our staff members take a look back at some of our favourite gigs and special moments.

My first gig at the venue was in 1984 when I saw Echo and the Bunnymen. Over the next few years I saw memorable gigs there with Faith No More, INXS and Oasis. In 1990/91 I even had a brief spell there working on the bar. I remember Michael Stipe being in the cloakroom after the gig at Rock City and being down the front at Nirvana for example, and they are the historic shows which people will continue to talk about for a long time to come.

Rock City will always have a special place in my heart, from my first gig - System of A Down (1999) to my all-time favourite gig, Queens of the Stone Age (2007).  For many years I spent every Thursday and Saturday night in rock city and met some brilliant people along the way. I also met my husband in The Rig 14 years ago!

I saw Thee Oh See’s there a while back, it was an epic show! Two drummers right at the front of the stage – mesmerising.  Great atmosphere too.  I was around the fringes for the majority as it was a school night, but Jack & I couldn’t help getting in and amongst it for the last few tunes. Also, noteworthy was seeing Do Nothing (2018) & Soft Girls & Boys Club (2019) up there opening the stage for Dot to Dot!

My first gig at Rock City was Paramore 2008 - pretty sure I'm on YouTube crowd surfing somewhere and I lost my shoe! What an amazing show that was! The best gig for me will always be Architects 2016, it was an emotional show for many reasons including personal reasons to the band so it will always have a place in my heart.

My favourite memory of Rock City has to be my first gig, as it totally changed my life. It was Hundred Reasons in 2002. I was 15, it blew my teenage mind and I always think about what would have happened if I hadn’t gone, and of all the incredible shows I would have missed!

My most memorable shows have been Yeah Yeah Yeahs back in 2003 as well as Arctic Moneys in 2006, but there has been so many great shows across the year to list them all

Despite once trashing the place, Ash are a definitive Rock City band and all their performances there are special. But my favourite has to be on the ‘Free All Angels’ tour when the ingenious idea to have foam sprayed to simulate falling snow during ‘There’s A Star’ nearly went disastrously wrong as the stage began flooding and roadies desperately mopped the floor and threw towels on the pedalboards to prevent the boys and Charlotte from being electrocuted.

Being an obsessed Manic Street Preachers fan, it was exciting enough to see them in such close proximity during the ‘Send Away The Tigers’ tour in 2008. Nicky Wire jumped off stage during ‘Little Baby Nothing’ to scream right in my face – definitely one of the best moments of the 60-ish times I’ve seen them.