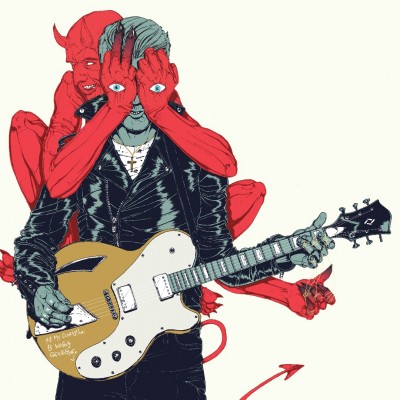 One of the most diverse and exciting rock bands to emerge for a generation, Queens Of The Stone Age have continued to produce a high calibre body of work which has seen them explore everything from whacked out stoner rock, huge metal riffs and even taken influence from folk and blues.

Fans will be thrilled to hear the news that they make their long-awaited return with the release of a new album titled ‘Villains’. In a surprise move, Josh Homme and company have opted to have the record produced by Mark Ronson who is better known for working with the likes of Adele, Lady Gaga and Amy Winehouse.

It features the crazed madness of ‘The Way We Used To’. A four-minute firecracker, the song is a fiesta of insanity which centres around a good, hard and heavy stoner riff like any classic QOTSA track should but with an added bright fizzy pop twist which we can be sure comes from Ronson’s influence. You can check out all the new tracks plus more from their amazing back catalogue when they take over The O2 Arena in London on Tuesday 21st of November. Set your personal reminder with Gigantic right now!

Queens Of The Stone Age tickets will be released at 09:00 on Wednesday.

While we get all excited for what they promise to be their best ever album, we take a look at the Top 5 Queens Of The Stone Age singles.

5. The Lost Art Of Keeping A Secret

Perhaps the most radio friendly of all their singles, ‘The Lost Art Of Keeping A Secret’ showed a massive creative leap for the band and immediately set the band on course for continued major success following its release in 2000.

Drawing on elements of folk and blues, ‘Burn The Witch’ still retains the unmistakable sound of QOTSA but gives it an added sinister layer creating a truly creepy and unsettling song. The lyrics read like a twisted nursery rhyme, mirroring a witch as they cast a spell upon the listener.

‘Little Sister’ is the dark and seductive single which was the band’s first introduction of gold selling fourth album ‘Lullabies To Paralyze’ and proves that you can never have too much cowbell in a song.

‘Songs For The Deaf’ saw the band joined on drums by none other than the almighty Dave Grohl of Nirvana and Foo Fighters. The platinum certified album included their mega hit ‘No One Knows’ which has become a mandatory track for any rock club or Guitar Hero session ever since.

1. Feel Good Hit Of The Summer

Feel Good Hit Of The Summer is an unhinged ode of love to a cocktail of narcotics. Simple, effective and straight down the line, there is no messing about with this song as the band recreates their rider requests in the form of a blistering 2.45 track.