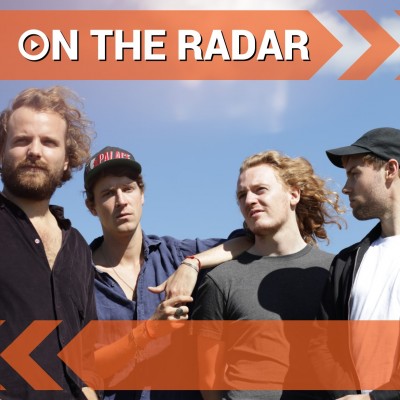 Taste makers have been quick to catch on to mature alt rock band Palace. Drawn to their pallid tones and earnest straight forward style, reviewers were instantly captivated by their Eps Lost in The Night, Chase The Light and have not been disappointed with debut album So Long Forever.

The record is dripping in reverb and understands that balance between pop hooks and a raw rock edge to create a listen which is both captivating and compelling. The offering is so confident and well produced it becomes hard to remember that this is their first.

Perhaps the band’s gorgeous melancholic melodies and heartfelt vocals stem in part from their surroundings. When looking for their own space to practice, write and demo, Palace discovered an ex-munitions factory in Tottenham being used by a wide variety of other musicians, artists and various creative types.

Heavily spray painted with graffiti and littered with drug paraphernalia, something about the stark gloom appealed to the band and they set about turning the warehouse space into their own studio. Although they have tempered the austere building somewhat to their needs, something about the architecture continues to bleed into the music.

“It’s damp and it’s dark, and it’s on a meter - so you never know when the lights will go off. We’ve always done everything in a slightly craggy, haphazard way. Nothing works when you’re trying to record but you get it together, working in unusual conditions. But the atmosphere of the place seeps into the music.” - Leo Wyndham, Singer

Good as the album may be, it is never enough to just listen their studio work and to truly understand a band you need to see them play live. So be sure to book your tickets to catch them when they tour in April of 2017.

Just when you thought you’d seen it all from Peckham punks Fat White Family, they go and surprise us again when two band members teamed up with Sheffield electronica partners The Eccentronic Research Council to form the world’s first semi fictional outsider Ouija pop group.

Drawing heavily on 60’s satanic psychedelia for inspiration, the ever-present creepy analogue synths are joined hugely delayed garage rock guitars that echo into eternity and an unstoppable amphetamine fuelled drum beat over which the band drawls about those mainstays of all good music – sex, drugs and rock n’ roll.

There is a certain element of knowing comedy to the whole thing. The band are certainly having fun in indulging every goth rock stereotype from creepy monotone vocals, to human sacrifice and pentagrams everywhere. But despite the sardonic videos they avoid becoming a complete piss take through writing such killer tracks.

Although we cannot tell if they are the pinnacle or rock or some sort of inside joke, The Moonlandingz certainly enjoy the benefit of celebrity backing as the original video for Sweet Saturn Mine features Shameless star Maxine Peake and more recently they have been joined by Sean Lennon to produce their follow up album.

Check them out for yourself when they play a handful of dates in March and April of next year.

You need to know Seattle born hip hop DJ Sango. The ace producer has been releasing killer funk carioca and soul enthused beats for over a decade now, well and truly proving that he leads the way in inventive deconstruction and re-imagination of music.

While he may be best known for his music he is also a gifted graphic designer would conceives and produces his own cover artwork having been a student at the illustrious Western Michigan University. This meeting of differing creative forms is somewhat in keeping with his music. As he unites his graphic talents with the music, similarly his sounds break down southern gospel soul with cutting edge sounds from the street to bring together

“I spend a lot of time thinking about how I can change things. I feel change is the first thing we as humans either love or hate. There isn’t a middle. I took a side and I love change. It challenges me mentally, emotionally, and spiritually. I also figured something out. I can't change the world, but I can change my world, which allows others to see inside of it and hopefully I can influence them to feel/do the same, and hopefully that trend goes on to the next person.” - Sango

Make sure you book your tickets to see him perform live at Gorilla (Manchester) and KOKO (London) this February.