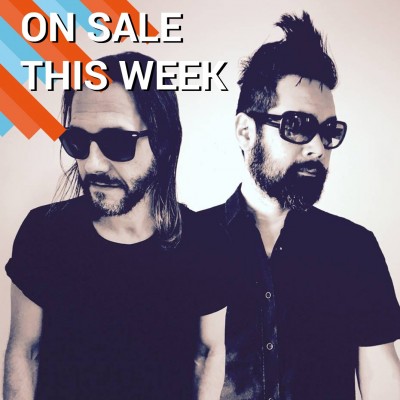 Few bands epitomise rock and roll like Primal Scream. Led by the enigmatic Bobby Gillespie, they have revolutionised music with their psychedelic acid house style that perfectly expresses every kind of excess.

They celebrate the summer by taking over Times Square in the heart of Newcastle where they will be supported by Super Furry Animals plus more great acts yet to be announced. Then in September they will join Massive Attack and Skepta to play at The Clifton Downs at Bristol before gracing the stages at OnBlackheath and OnRoundhay.

Alter Bridge are about to embark on a huge tour of the UK during which they are expected to play material from their upcoming highly anticipated album. The eagerly awaited dates see them supported by the massive bands Gojira and Volbeat.

They have been amassing an ever greater international audience since their inception in 2004. Make sure you get a ticket for when they stop to perform at an arena close to you.

A Day To Remember are amongst the world’s biggest rock bands with 400 million streams on Spotify whilst being viewed on YouTube over 500 million times and selling out previous tours. It is no surprise that Rolling Stone have declared them as “An Artist You Need To Know ”.

With the upcoming release of their new album Bad Vibrations, A Day To Remember will kick of 2017 with a huge arena tour in January.

Click HERE for your A Day To Remember ticket.

Fans and critics alike are excited by the news that Bastille are about to release their second album entitled Wild World and with good reason. They bagged Best Breakthrough Act and were nominated for British Album of the Year, British Single of the Year, and British Group at the 2014 Brit Awards following the release of their debut album Bad Blood.

Tickets are available for when they play at V Festival and headline Motorpoint Arena Nottingham.

Coming on sale soon we’ve got a whole host of excellent rock bands including the massive metal band SOiL, the unique desert garage rock from Eagles Of Death Metal plus indie rock from Band Of Horses and Feeder are back to get high with their friends. Also coming on sale we have Devin Townsend Project and rising stars Love Zombies.

For those of you looking for something truly alternative check out the oddball sound of The Moonlandingz. The psych inspired art-rock is somewhat of a supergroup melting together members of Eccentronic Research Council with Fat White Family to produce something satisfyingly weird.

We’ve got some great Singer\Songwriters about to tour such as new boy Leo Stannard and York lad Benjamin Francis Leftwich.

And if it is beats you’re after then definitely check out the new champion of grime Yxng Bane, grunge rapper Jez Dior and award-winning poet Kate Tempest will be performing a live hip hop enthused set.

Taking place at Chillibobs farm, East Midlands Chilli, Beer and Artisan Festival is a must for anyone with a taste for something spicy. The festival features over 70 food stalls, including dishes for people with less adventurous tastebuds, plus Real Ales and Craft Beers.

Free entertainment such as face painting, a puppet theatre and bouncy castles make it a superb day out for all the family

Mirrors is a brand new festival taking place at the very best venues that the London borough of Hackney has to offer. Given the areas reputation for being ultra-cool you can expect to hear the very best cutting edge music.

So far the excellent electronic wonder Bat For Lashes, garage band greats Allah-Las and premium hardcore punks Fucked Up are all confirmed to play with more yet to be announced.

Also on sale we have the one and only Dizzee Rascal. The enigmatic MC will be headling at Tramlines and Penn Festival before going on to play at Sundown Festival and his very own show at Hastings Pier. Definitely check out New Jersey’s finest new rapper and producer Clams Casino when he hits London in August.

Master of horror John Carpenter is one of the true pioneers of American film. His mastery of direction and screenwriting is matched by his veracious skill for writing truly terrifying scores. He will perform his synth-based chillers to audience over Halloween.

Oozing with satisfied lethargy, Warhaus draw on the smouldering aesthetic of French cinematic noir as the influence behind their well-polished electronic pop to encapsulate a sound and image which is enviously cool.

Alternative audiences will be happy as Americana band The Felice Brothers have announced their tour and the recently formed three-piece post rock band Eyre Llew have just released their elegant and uplifting single Vorfreude giving a taste of the forthcoming album. You can expect to hear the new song plus more when they play at Norwegian Church in Cardiff.

And finally Shaun Ryder will be regaling audiences with stories of the wild nights in Madchester, his experiences with UFOs and snapshots of his hedonistic life.