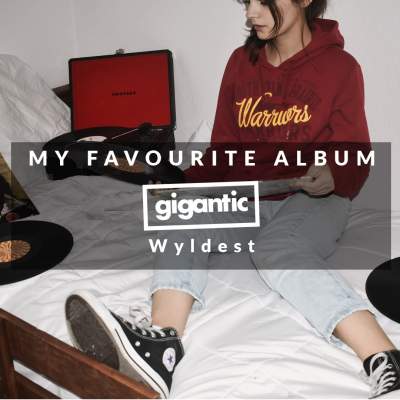 My Favourite Album invites those with a passion for music to explore the records that inspire them. And today, Gigantic talks to Zoe Mead aka Wyldest!

North London dream pop band Wyldest, led by songwriter Zoe Mead, were quick to impress at initial shows that attracted widespread praise from the likes of DIY who then marvelled at the “sparkling synths, muted guitar lines and smoke-doused vocals” on early single “Cruel Dusk”. And when debut album Dream Chaos arrived in 2019, it was immediately celebrated as an underground hit for its compelling lyrics, bright melodies and resurging shoegaze sound.

Now, Wyldest drop their brand-new single “Beggar”; a perfectly tender heartbreak anthem giving us a first glimpse of upcoming second record Monthly Friend which will exhibit characteristics of a concept album by truly inhabiting the female experience and expressing it across ten enthralling songs. Written, mixed and produced by Mead herself; Monthly Friend will be a powerful listen and is scheduled for release on Friday 28th of May. Click HERE to pre-order your copy on MP3 and vinyl.


When watching Lost In Translation I heard "Alone In Kyoto" for the first time and haven't stopped listening and referencing this album since.

This album inspired me to start making textural music, not just to write songs, but to also think about production and instrumentation. The progressions and textures used on this album are enough to stir up all the emotions all at once, even without the need for lyrics. Saying that though, some very beautiful lyrics weave into the album.

Talk Us Through Your Favourite Songs And Lyrics On The Album?

Lyrically, "Venus" is my fave. "You could live in the sea / And I could be a bird / We would be together." This sense of infatuation and longing seems to be a theme that runs throughout the album and this is where it’s put into words, which blends perfectly with the other-worldly, compositions.