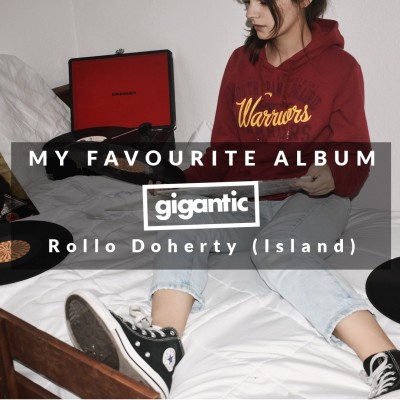 Gigantic speaks to essential songwriters and artists, asking them to share with everyone the records that truly inspire them for My Favourite Album. This week, we are joined by Rollo Doherty from rising stars Island.

Mesmerising early single “Try” immediately captivated audiences and would feature on acclaimed debut album Feels Like Air which dropped in 2018 and saw Island propelled onto the world stage, playing right across Europe and the US with their singles streams approaching the 1mil mark. They followed up a year later with their four track EP When We’re Still which, with its stirring songs and atmospheric feel, thrilled fans and critics alike.

Recorded amidst the COVID chaos, this summer saw the boys return with a new full length record Yesterday Park. Drafting in producer Mikko Gordon, famed for working with such esteemed acts as Thom Yorke and Arcade Fire, their latest LP is a true evolution of everything which has excited listeners from the start, bringing it to an exciting new level and defining Island as one of the most exciting rising British bands of this generation.

Island celebrate their second album Yesterday Park with an autumn tour which takes them to The Cluny 2 in Newcastle, iconic Sheffield venue The Leadmill plus Night People at Manchester in October. CLICK HERE to grab your tickets!

Department Of Eagles - In Ear Park

I remember sitting at school, trawling through music magazines cover to cover, downloading every album I saw, trying basically anything to avoid doing any work. Me and my friend George, who I would write songs with, would always play each other anything we found, and usually listen to albums all the way through. Sometimes dancing a bit. It was probably the time I listened to music most, and the time I discovered the albums that have had the biggest impact on me.

In Ear Park came out in 2008, and although I was a Grizzly Bear fan at that point I hadn’t heard Department of Eagles (the side project of singer Daniel Rossen). Up to then I had always had an obsession with Peter Green, and always saw him as my guiding light musically, but something about Daniel Rossen felt a lot more akin to what I was doing myself. I developed a different kind of love and admiration for him. In Ear Park was its own world, it became a place that I’d go rather than just a collection of songs, the layers of intricate sounds I’d just be instantly immersed in. The atmosphere of the record was totally unique to me, with the vocals, almost string like at times, floating over the guitars that would drift around the piano parts, with the woodwind arrangements almost breathing along to the music. It wasn’t an album that me and George danced to, although I’d like to see him try.

A year after I left school I was working in an eco-hostel in the Osa Peninsula, Costa Rica editing a video to raise money for some solar panels, as the hostel it was completely off grid. I was still listening to Department Of Eagles a lot, and they provided a perfect soundtrack to the long bus journeys through the mountains. Some nights the guys that ran the place would ask me or my friend Lucas to man the bar for guests, play music and keep everyone well looked after. We had met a Canadian/Lebanese couple on the road, earlier on in our travels, who we’d been calling our travel parents, and they had come to stay at the same hostel. It was secluded and, in my mind, unrivalled in its beauty, built entirely out of bamboo, with little buildings dotted around the cloudforrest. I remember playing In Ear Park to Joey (travel dad) as we hung out at the bar that sat on stilts just above the canopy of the jungle. We’d sit for hours listening to the album as the sun went down and I’d serve him beers, and then do the same again the next day, and again and again until we left. For some reason I recall it so vividly. His reactions to hearing the songs for the first time, his wide eyes. Being on the other side of the world and finding someone who sees and hears as you do is a special thing and the sound of the woodwind and twelve string guitars floating over the trees is often what I picture when I listen today.

I always loved how the album had a real sense of place. The way I saw it was that every sound that came out of the record had come out of this unworldly place, this park that wasn’t real except for in the music - in a way this was a big inspiration for our new album. Like the Lonely Hearts Club from Sgt Pepper's, there’s something that I love about listening to an album that feels like it exists somewhere specific, was born and lives there and there only. Before the name of our new album came about I had found myself singing about the parks I went to as a kid - the one I’d go to after school with my mum, one where I used to meet my old friend Kolya, before we fell out. It felt right to give a nod to one of our collective favourite albums in the title of our own.

Years after I’d returned from my travels I would still occasionally get messages from our travel dad Joey and his wife Lisa. Back on other sides of the world we would update each other from a distance on what we’d be doing, and I would always wonder if I’d see them again. Maybe Joey wondered the same thing, because he’d sign off each message - “I’ll see you in Ear Park”.