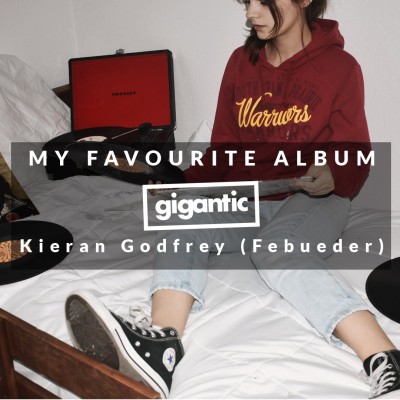 My Favourite Album brings you the best records, as chosen by the essential artists you need to know. This week, we talk to Kieran Godfrey – one half of pioneering dream team Febueder.

Greater than the sum of their parts, innovative indie pairing Febueder have already established themselves as one of the most vital breakthrough bands of recent years. Comprised of just two members, multi-instrumentalist/singer Kieran Godfrey and percussionist Samuel Keysell have developed their own defining sound which marries playful experimentation with chilled alt-pop sensibilities. Even listening to debut EP Lilac Land and early single “Morning Yawn”, the tremendous talent and idiosyncratic sound is already there, making it hard to believe they were not recorded by a “full” band.

Last year saw the duo drop acclaimed debut album Tomalin Has Etched In. Boasting an ambitious sixteen tracks, their first full length attracted widespread attention from such esteemed tastemakers as CLASH who praised the avant-garde album for its “beautiful imagery”.

Now, they release magical single “May Sun” which is another shining example of a formidable new creative force in it’s ascendency.

Febueder have announced a series of exciting headline shows on sale with Gigantic including; 08/09 Gullivers - Manchester, 10/09 Louisiana - Bristol, 11/09 The Lexington - London and 21/05 The Moth Club - London. CLICK HERE to grab your tickets!

Beirut’s LP No No No

I prepared for the first listen to be around my garden fire pit party in Ascot. That night, my wife, Samuel and his girlfriend drunkenly decided to commandeer a neglected rowing boat from a golf course, carrying like a coffin for about a mile to hide it and return the next morning to row in a large pond.

It was a 4 year gap between The Rip Tide and No No No, so I was astounded to hear one of my favourite bands return; I learnt to play brass because of them.

I think “No No No” is the quintessential feel good single, the songwriting is simple, sophisticated, rich and of course catchy.  The lyrics sound satirical because it’s about being clueless about someone you’ve met and rushing into life changing decisions.

“At once” is one of my favourites, it’s a short and delicate reverie. The lyrics are haunting on the chorus and are the most memorable on this LP.

“Perth” is Beirut’s equivalent of "Express yourself". I imagine a gigantic teddy bear waddling towards me for a hug every time I hear this; that’s what the friendliness of this song evokes.

“Pacheco” is a notably slow song. I naturally slow down when I hear it, it’s calm without ambience.

“Fener”’s drastic tempo change and retro synth is my favourite part on this one. Zach Condon has the most beguiling voice, even when drolly sounds intrude, I’m enamoured.

“So Allowed” is the finale to the LP. The plangent end on brass is what makes this song unforgettable.