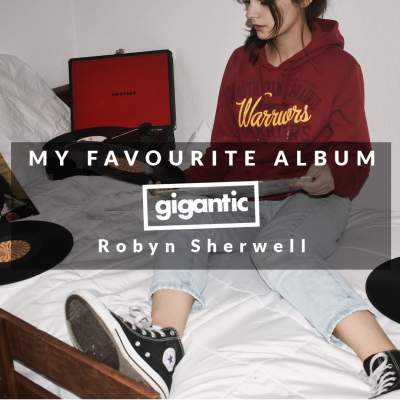 We all share a passion for music, and Gigantic reaches out to musicians to discover the records that changed their lives. Today, we are joined by Robyn Sherwell for the latest edition of My Favourite Album.

Extraordinary electro-pop songwriter Robyn Sherwell announced her arrival in 2015 with the release of first single “Love Somebody” which was quickly picked up by Lauren Laverne who championed the song on her BBC 6music show. Soon followed by second song “Islander”, Robyn established a powerful emotional connection with her listeners, leading to a prominent slot at Glastonbury Festival.

The following year, she dropped her eponymously titled debut album Robyn Sherwell which cemented her status as a new star on the scene, enjoying universal acclaim and hitting over 20 million streams.

Today sees the release of Robyn’s breath-taking brand new single “Bare Minimum” which introduces her highly anticipated second album Unfold, scheduled for release in summer. Co-written with London based songwriter and friend Litening, “Bare Minimum” reveals the raw emotion and innovation of a true electronic pop phenomenon in ascendence, and hints at the greatness of the record to come.

When Did You First Hear It?

In 2009. I was introduced to Foy’s music at a live show in Dingwalls, London, which my then bass-player-friend (now my husband) invited me to. I was living in a big house share round the corner in Camden at the time, and trying to find my feet starting out as a singer songwriter. I’ll never forget that show, and these were the songs Foy was playing then. His next full-length studio album Joy Of Nothing didn’t come until 2013, so I got to know Hope intimately in those years, along with a couple of other shorter EPs, anything else I could get my hands on. I saw Foy at whatever subsequent shows I could get to. Alone with just a guitar, he was absolutely mesmerising. He had an audience who would sing his songs in harmony and who would keep singing long after Foy had departed from the stage. It was unforgettable.

That first show was a pivotal moment for me in a lot of ways. Apart from falling in love with Foy’s voice and live performance, I found so much inspiration from his songs and he became an important influence for me as I sought my own direction as a heartfelt singer-songwriter. At that show, I was also introduced to a circle of musicians via my husband-to-be, in particular I met my live-show collaborator and guitarist Connor. Connor was also a longtime Foy fan, and played the same brand of acoustic guitar as Foy, the Irish-made Louden. Connor became a close friend and a musical wingman; he played on my early demos, my debut album, and features on my forthcoming album too. He was there by my side for nearly every live show I performed, including Glastonbury Festival, and we took direct inspiration from Foy’s live stage show as we evolved our use of a loop station to build as much sonic depth as possible, with only the two of us on stage. As you can imagine, Hope has been the soundtrack of many long car journeys to shows, tour buses, late nights, happy memories with friends, so it means a lot to me both as an artist and personally too.

Talk Us Through Your Favourite Songs and Lyrics On The Album.

My favourite song on the album is “Elshaneed” (title taken from the lyrics ‘anything else you need’). This beautiful love song was part of the music during our wedding ceremony when my husband and I got married so it holds special memories for that reason. The production is simple and organic and Foy’s intimate vocal is magical:

I'll be your ice cold water

When you're burning up and finding it hard to breathe

I'll be the wind that carries you fallen leaves

I'll give you the sweetest daughter

In whom we can plant a seed

I'll be the river running

For your oceans to greet

Another stunning track on this album is “Two Shades Of Hope”, which dwells on how the nature of hope itself can lead us to the hardest of heartaches, when hopes are dashed. This song has always resonated for me and I can remember being moved to tears the first time I heard it.

If there’s one thing that I know

It is there’s two shades of hope

One the enlightening soul

And the other is more like a hangman's rope

Well it's true you may reap what you sow

But not that despair is the all time low

Foy has that ability to put across raw emotion and earnest story telling that I adore in all my favourite artists, from Carole King to Joni Mitchell. It’s real, it’s authentic, it’s relatable, and it’s so compelling.

Foy’s since gone on to make other great albums, arguably with better production, and I love those too, (my favourite probably “She Burns” from The Wild Swan) but this album will always hold a special place because its the first music of his I heard. I’ve seen Foy play these songs everywhere from The Social to the Royal Albert Hall; they have soundtracked so much, the ups and downs, love, loss, marriage, motherhood. They’ve become part of the tapestry of my life.