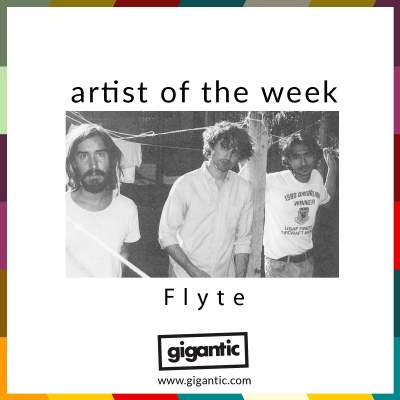 Daring to be different; London based three-piece band Flyte recall the joyful first flourishes of experimental pop in the 60’s whilst also able to be a unique voice, singing the experiences of the new generation.

Having first impressed with their accomplished debut album The Loved Ones, they now release a lauded second LP This Is Really Going To Hurt which takes them on tour later this year – tickets on sale with Gigantic right now!

School friends Taylor and Supran had already been playing together before inviting Hill and former bandmate Sam Berridge to form Flyte, a group they named after the Brideshead Revisited character Sebastian Flyte. Inspired by the emotive side of indie rock, the music they set about creating was at once melancholic yet uplifting, lending itself well to an anthemic feel.

In 2017, the boys flew to the other side of the world to work with Burke Reid, the renowned producer who helped singer/songwriter Courtney Barnett find her voice. Taking huge influence from the techniques advanced by such pioneers as Nick Drake, Bowie and even The Beatles – the resulting record was a remarkable first record which they named The Loved Ones. Fusing experimental ambition with pop sensibilities, it was a huge hit with fans around the world and saw them named by The Sunday Time as ‘Best British debut of the year’.

This year has seen them return with their second album This Is Really Going To Hurt which critics are calling a huge leap forward for its immense emotional depth as the raw record that recounts the collapse of Taylor’s eight-year relationship, recounting all the bittersweet moments and the pain before feelings of exquisite relief as Hill explains;

“It was from a very dark time, [the album] starts in this very dark, sad place, and it just slowly and incrementally just pick itself up… Written in a dark cave, recorded in the sunshine.”

Combing a dream team including producers Justin Raisen (Angel Olsen) and Andrew Sarlo (Big Thief, Bon Iver), plus mixing engineer Ali Chant (Aldous Harding); the poignant album includes the singles “Never Get To Heaven”, “I’ve Got A Girl” and “Losing You” whose poignant pop perfection all contribute to making it one of the most essential releases of the year.

Flyte have been selected to play support for indie legends Keane when they tour this summer. Plus, they will be playing headlines shows in September to promote stunning new album This Is Really Going To Hurt.