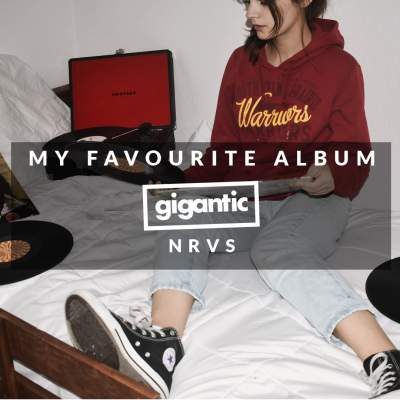 Gigantic talks to the most exciting cutting-edge artists to get their take on the record you need to know. This time round, we have a submission from NRVS!

Tapping into the angst of a world teetering on the edge of total environmental collapse whilst also under threat of imploding from constant social tensions, NRVS answer is to form an anonymous collective which answers the apocalypse with truly addictive alt rock songs packed full of grungy hooks. Their initial singles “Bad Taste” and “Revolution Traffic” have grabbed immediate attention form the likes of Louder Than War, Yuck and more.

They kicked off this year with the release of their latest single “See Yer Hate To Be Yer”; a scuzzed up anthem kicking against false rebellion and gentrified agitation with energetic pop punk and agitational lyrics.

NRVS have just recorded their Solitude Sessions for Jericho Keys on BBC Introducing, which you can listen to HERE.

The greatest hip hop album ever made.

I’ve been a hip hop fan for ever: the first record I ever bought was By All Means Necessary by Boogie Down Productions; the same is true of the other N r v s. But I was late on 36 Chambers. Didn’t get into it until about 2000 when I found it while working my way through my best friend’s record collection for stuff to “borrow”. At first, I was scared to put it on ... that cover is creepy!

It means total freedom of expression: artistic, personal, cultural, political. I feel those guys just letting it all out, good bad and ugly, and doing it completely in their own way that they were discovering and inventing as they did it and no fucks given ... and that is fucking beautiful as well as beautifully scary.

It means a dirty-but-clean sound that captures ... everything. The perfect embodiment of the punk rock DIY spirit, yet executed by real musicians at the nexus of their technical brilliance and creative genius.

It means getting high as hell and nod-banging your head until you pull a muscle in your spine. Protect ya neck!

These guys were coming from a world that was almost unimaginably far from the world I knew, yet somehow they were able to communicate that world in a way that I felt I could imagine what it would be like to live there; that’s art. And the world they describe is one that’s full of suffering and often terrifying … yet they tell it with such humour pride and grace that you almost envy them it. That’s poetry. That’s the fucking blues.

“The Wu got something that I know that everybody wanna hear it, cos I know I been waiting to hear it ...

We know all the lyrics to all the raps on 36 Chambers ... and all the skits too. We often quote them back to one another; there is a quote for almost any situation! This one means a lot to all of us because it is what motivates, legitimises and gives confidence to all our music making efforts. It also works on a practical level self-assessing what we’re working on.

Try to keep your head still and not put on a huge “gangsta” beat-face when the beat comes in. Just try it. And one of the “hooks” is the clicking of a rotating revolver chamber ... or something.

Can the most grimy hardcore gangsta shit make to cry like a baby? Yes it can. This is true soul blues hip hop.

It might sound weird for white guys in a punk band to say they were influenced by the blackest hip hop outfit out there ... but we were and are.

Before Nrvs I rapped in a hip hop group you’ve never heard of. In Nrvs, we’re always looking for a thick fat dirty bass and drum sound. Our guitar and organ lines often work like the sample-hooks in RZA’s beats (and I actually use my guitar kind of like a sampler, in that I often use simple, abstract, repeated guitar phrases over a bass-driven groove ... this is mostly because I can’t really play the guitar properly, so I tend to find bits that sound good to me and then play them over and over again). I guess I write lyrics a bit like I’m writing raps, and in vocal delivery we’re always going for flow and realness over melody and in-tune-ness.

Imagine meeting up with the Wu-Tang ... in December ’93 ... and bringing them into a recording studio to make a new record. But instead of turntables and stacks of vinyl, the studio is equipped with a full set of rock band instruments. And then imagine locking them in there (would you dare?) with food and weed and not letting them out until they made a banging punk rock record. That’s what we want to sound like.