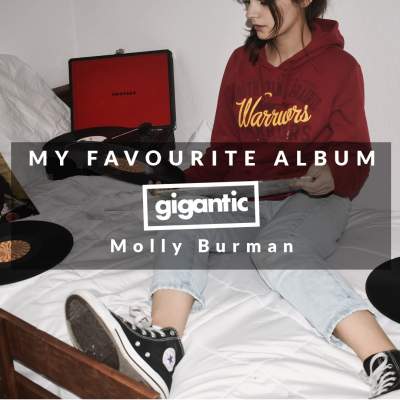 Gigantic speaks to cutting-edge artists about the music that inspires their work with My Favourite Album, and this week we speak to rising song writer Molly Burman!

The sharp humour of teenage wunderkind Molly Burman is threaded right through her unique take on melodic indie pop which reflects the realities of her North London life. Self-produced, Molly retains an intimacy in her music which shines through on debut single “Happy Times” which reflects on how to move past those moments we would rather skip and established her as the new name to know.

She now follows up her early success with new single “Fool Me With Flattery”, her personal account of being side-lined and patronised by the patriarchy which she takes down with her signature wry wit. Released last month, the sensational song has already amassed a staggering 23K streams on YouTube alone!

I would’ve been about 6 when I first heard this album. I went to see the film Curious George, after that my Dad bought the CD.  Me and my family would play the album over and over again, it quickly became my ‘growing up’ soundtrack.

It might seem like a weird choice, but no matter which album I fall in love with, this is the one that will always have a special place in my heart. It was the first album I became obsessed with and learnt all the lyrics to, it might even be the one that started my love for song writing. Every time I listen to it, it takes me back to a really peaceful place in my childhood, I can’t really listen to it without getting emotional! Not to mention its the soundtrack to a beautiful film, who doesn’t love a curious monkey / human friendship?

One of my favourites would have to be “People Watching”, it’s a really good song for staring into space and thinking to. I love the lyrics “Well I'm just people watching, the other people watching me” and “I see so many feet going so many ways, People passing by they got nothing to say”, to me, they mean that we are all so wrapped up in our own little lives, we all have our own perceptions and ideas about other people, but when it comes down to it, we are just watching everyone from behind a window. I think it’s a really true message and definitely something I relate to.

Another one of my favourite songs has to be “Broken”. This song for me, is about quitting a job/relationship/situation that is making you unhappy and finally getting some motion in your life. I really relate to the lyric “feeling like my life was finally mine”, when you’re doing something that doesn’t make you happy, you feel less and less like yourself, and when you finally break free, it’s like you get your life back.

I also love the lyric “Without you I was broken, But I'd rather be broke down with you by my side”, I think it’s such a beautiful comment about the difference good people can make in your life, even though you might still be broken, the people who stand beside you make everything feel better. This song is a wonderful take on friendships and surrounding yourself with things that make you happy.

I could go on and annotate every lyric on the album, but I’ll stop here!