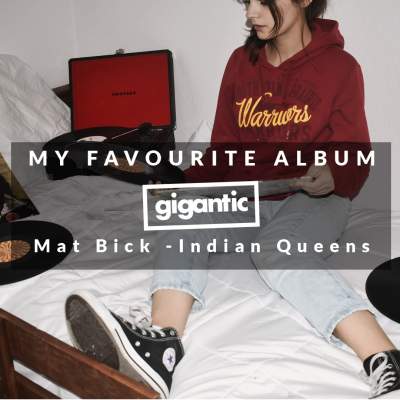 Continuing our quest to discover all the essential LPs, we are joined by Indian Queens drummer Mat Bick for the latest edition of the My Favourite Album blog.

Singed to Bella Union, last month saw the release of their stunning debut album ‘God Is A Woman’. Dark and hypnotic, this critically acclaimed first release is densely atmospheric and its a true joy to lose yourself within its moody confines.

‘God Is A Woman’ is now available on White Vinyl (signed), CD (signed) and Cassette including B-sides and rarities plus a money saving Bundle complete with a t shirt!

‘Songs for the Deaf’ Queens of the Stone Age

I first heard ‘No One Knows’ on MTV2 or maybe it was Scuzz or something, it was a jaw drop moment, just couldn’t believe the amount of fuzzy, rocky, poppyness that just was oozing from the speakers. It just seemed important. Necessary.

It’s just such a journey of an album, probably the only album I played continuously from cover to cover without skipping a song being the sporadic 13-year-old listener that I was! It definitely had a massive impact on the way I play as a drummer, the parts are just as musical and catchy as the guitars and vocals. In the studio with Indian Queens, we always fall into a stage in the recording when we ask ourselves “What would Josh Homme do?”, things get infinitely more creative and weird.

This is almost impossible!

‘First it Giveth’ is this mega kind of salsa rock that turns into a bit of a stoner-monster, the chorus blows my mind every time I hear it, genuinely, Dave Grohl is just a beast on it.

‘The Sky is Fallin’ is also one of my faves, it half reminds of their previous album ‘Rated R’ with loads of floaty vocals, haunting guitars and the chorus is massive.

In my opinion a masterpiece!