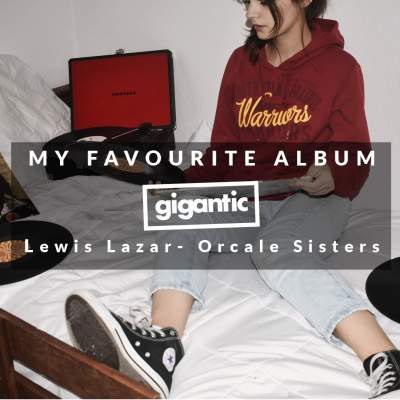 Our voyage of discovery for fantastic records continues with a My Favourite Album contribution from Lewis Lazar, lead guitarist of Parisian trio Oracle Sisters.

First formed by Lazar and long-time friend Christopher Willatt after the Belgium boys both relocated to the French capital, the pair of pals were completed with the addition of drummer Julia Johanssen and have been attracting widespread attention with their effortlessly cool style and lightly atmospheric feel.

Oracle Sisters have just dropped their new single ‘Most Of All’ which taps into their love of Westerns and plays tribute to the ‘troubadour spirit’ that runs deep through their music whilst also making reference to French cinema.

Their debut EP ‘Paris I’ is scheduled for release on Wednesday July 8th. Check their Bandcamp page for further details.

This is Nat King Cole sings in Spanish but the Flemish version entitled ‘Zijn Grootste Spaanse Successen’ I believe the American edition of the album was called ‘A Mis Amigos’.

It’s my favourite album today, if not the only album I can get my hands on in confinement.

When is it from?

This is a 1981 print, but the album dates back to 1959, back when Mr. Cole used to hang out in Havana, before the Cuban revolution.

I heard it late one night at my friend’s place who’s in lock down in the same village as me right outside of Paris. The drinks were going around, there was smoke in the air and ‘Noche de Ronda’ came on.

It brought me back to another world, that I could feel around New York, it reminded me of Vincent Livelli, my friend who just turned 100. We worked on a book together (‘Historietas-Vincent Livelli’) about his life and Afro Cuban music specifically: the drum married to the voice, and the beat from Africa. There’s something essential and ancient in Afro Cuban music, you find it in the blues too.

I didn’t know Nat King Cole sang in Spanish, though he has a thick American accent on some, he does some beautiful renditions.

It reminded me of ‘Calypso Blues’ that I first heard the day Hurricane Sandy hit Manhattan. Nat King Cole sings from the perspective of a Trinidadian far away from home, presumably stuck in America, he misses his former life, his loves and the delicious food and the culture he left behind, and for what?

It’s my favourite song of his. He gives a voice to the millions of migrants and workers who are far away from home and nostalgic, pertaining to that Portuguese concept of Suadade [an overwhelming sense of bittersweet melancholic nostalgia].

Favourite Songs on the Album

‘Noche de Ronda’ is beautiful (there’s a guy called Frankie Reyes who does an incredible version of this) and ‘Perfidia’ is good too.