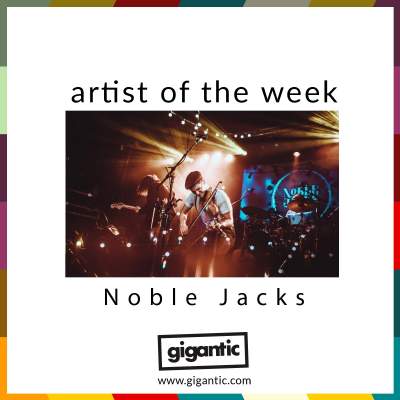 Noble Jacks is the high energy Anglo/Americana two-piece band comprised of guitarist Matt Deveson and multi-instrumentalist singer Will Page who also takes on guitar, fiddle plus mandolin. Formed in 2014 after they saw The Levellers headlining Beautiful Days, the boys were inspired by how they could knit the audience together in a spirit of unity and sought to find their own unique blend of folk and pop to present to the world.

The Brighton-based duo dropped their awesome debut album ‘What The Hammer’ in 2017 which captured the sense of community and the energetic joy of their live shows and firmly established the band as a force to be reckoned with as their fanbase swelled and saw them generating a huge buzz amongst the pages of folk and country publications, thrilled by their fresh take on traditional sounds.

In 2019, Noble Jacks took it to the next level with the release of incredible album ‘Stay Awake’. Featuring such stunning singles as ‘Stomp’, ‘Rely On Love’ and ‘This Is Real’; their second full length record would see the develop their sound and even experiment with elements of electronica that would help them reach even wider audiences, achieving critical acclaim and commercial success by breaking the Top 10 in the UK Americana album charts.

The release was celebrated by a sold-out launch party before the boys commended a UK wide promo tour that saw them grace the stages of such major festivals as Glastonbury, Isle of Wight and Bestival plus hitting the European festival circuit.

In fact, ‘Stay Awake’ has been such a huge success that the renegade crew have now re-released it again this year as a Deluxe Edition double album which includes a gorgeous gatefold sleeve on vinyl and features additional tracks.

With their sights forever set firmly on the road, Noble Jacks will see out the year with a handful of headline dates during December. Make sure you join in with the thigh slapping action and grab your ticket to see this Alternative Americana/Rock band with Gigantic right now!