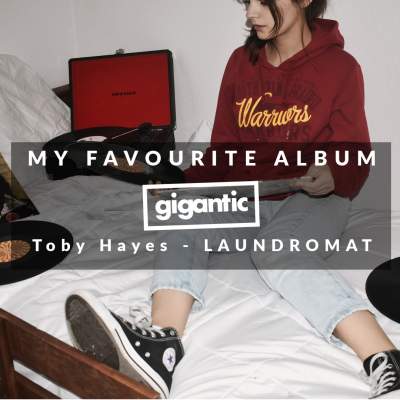 Joining us for this edition of My Favourite Album is Toby Hayes who has just embarked on his exciting new solo project LAUNDROMAT. Oozing with lo-fi charm, his imaginative unique take on experimental indie rock fuses observational lyrics with punchy minimal beats and bright pop hooks as captured in his very own bedroom studio.

Following on from living in China, Haynes underwent an extended period of transition and found himself relocating from Berlin to London before finding a home in the seaside resort Brighton, a city famed for its vibrancy and creative community. This lengthy experience of flux bestowed Haynes with a unique perspective that informs his idiosyncratic music, allowing him to rediscover the simple joys of everyday live, renew his sense of aesthetics and revaluate his relationships to both the people and the culture that surrounds him.

This deconstruction process can be heard in the recently dropped Laundromat singles ‘Humans’ and ‘Slow Clap’, both of which appear on his new ‘Blue’ EP. Click HERE to grab your copy or stream.

Gonjasufi – ‘A Sufi And A Killer’

Thom Yorke used to make these playlists on the Radiohead website. It was just a list of songs, no links or anything. ‘Ancestors’ was on one of them.

Obviously, it’s basically impossible to choose a favourite record, but this one certainly re-framed my perspective of music. I’d not really heard anything like it when this came out. It was one of those times where it feels like you have found treasure. Still feels like that now when I listen to it.

The production blows my mind, really playful, almost uncertain, but still absolutely deliberate. A peek into someone’s imagination - I think that’s my favourite thing about this. Big time inspiring. I was working in a record shop in Covent Garden when this came out, always had it playing so I guess it reminds me of that time.

'Ancestors' always reminds me of the first listen, makes me want to get out of the UK. I really love ‘Sheep’, and ‘She’s Gone’. Mad to hear this kind of song writing produced like this.

The backing vocals in ‘Sheep’ melt my brain, and the drum sound. ‘Duet’ is up there, like a woozy daydream, wish I’d made that tune, same with ‘Made’. Honestly, the whole thing is next level.