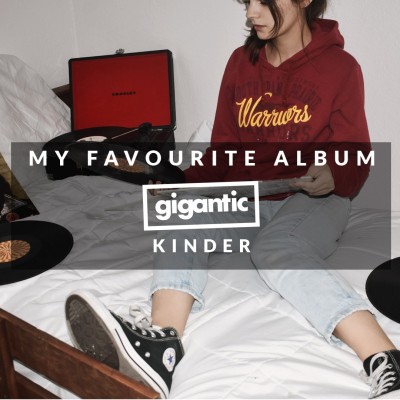 #NewMusicFriday reaches out to crucial acts and asks them to talk about the record that first lit a spark inside them. And so, we are very excited to be speaking to KINDER!

Adopting the name KINDER, London-based multi-instrumentalist Leo Wyatt has continually impressed with his evocative mix of tender vocals and innovative approach to songwriting, which sees him mix up trip hop with R&B and electronica. Following the release of his magnificent song “Gently” which saw him named by the Sunday Times as their ‘Breaking Act’, many more are calling him the most exciting new act of 2021.

Today sees the release of his stirring new single “Call Out”. Boldly introspective, Wyatt dares to open a window directly into his soul and give his account of his experiences of depression and isolation, and his initial self-destructive responses to the pain.

With intricate melodies interwoven with atmospheric beats and dramatic flourishes of key work, it is hard to believe his latest offering was originally sketched out as a rough demo recorded in bed on his phone. It reveals the tremendous talent of this rising star, able to channel their creative energies and transform their darkest times into such breath-taking sounds with such huge emotional resonance.

“Gently” and “Call Out” will both feature on the KINDER’s debut album Different due for release on October 22nd via Lapsang House, which you can Pre-Save HERE.

My songwriting tutor at university introduced me to the song “Way To Blue” when I was interested in learning string arrangement, and I instantly fell in love. I went straight to the library and took out every CD I could find with his name on it.

It's such a haunting record that captures the darker side to Nick's story, but it has rather the opposite effect on me. It reminds me of spring and nature and has been a source of solace for so many years now that I couldn't imagine a Sunday afternoon without it. It’s an incredibly personal record for me that has followed me through the highs and lows, for a long time I didn't talk about its influence on me because in many ways it hasn't influenced my music - but it has most certainly changed my life.

After getting the CD from the library and sticking it on to hear “Way To Blue” I was hit in the face (very softly!) with “Time Has Told Me”, which has held the crown of favourite-song-on-the-album for the most years. It's a hopeful song about going with the flow despite the troubles life throws at you and in many ways has become my mantra in life.

will find its shore

Thank you for having me :)