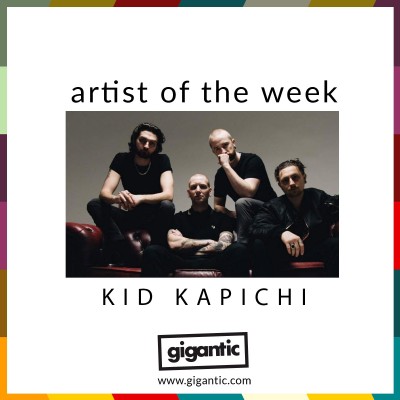 Dual fronted hard rockers Kid Kapichi have quickly become synonymous with rampant riffs and their no-shit attitude. Featuring the talents of Jack Wilson and Ben Beethem, who both share guitar and vocal duties, plus drummer George Macdonald and bassist Eddie Lewis; their renegade sound is igniting passions in their rapidly growing fanbase.

Their debut LP This Time Next Year was one of the biggest independent releases of 2020 and should have seen them immediately rise to the top and claim their rightful place as the hottest new British band. Only to be stopped in their tracks by the pandemic.

Raring to be let of the leash once again, the boys have announced an autumn tour to finally show off their killer first album – tickets on sale with Gigantic!

"The light at the end of the tunnel isn't too far off now, we hope"

Kid Kapichi announced their arrival with “2019”; their politically charged anthem rallying against the forgotten voice of the lost generation. It was quickly seized by such big names as Steve Lamacq, Annie Mac, Huw Stephens and Tom Robinson who all were eager to champion the feracious new band.

The summer saw them drop debut EP Sugar Tax and made an incendiary appearance at Leeds \\ Reading Festivals. They also went on to play support for Frank Carter & The Rattlesnakes on their European tour.

Last year saw the release of their stunning debut album This Time Next Year, which introduced the world to such blistering hot singles as “Working Man’s Town”, “Self Saboteur” and “Violence”. Produced by the band themselves, the self-released record is a remarkable initial statement, making a huge impact with critical acclaim and commercial success breaking into the Top 20 in the Album Charts, and reaching No. 6 in the Independent Album Charts.

“It’s a collection of songs that encapsulate the general feelings we have had of the monotony of modern life and of the unfairness in the world right now. We tried not to shy away from it and instead face it head on. In classic Kapichi style, it goes from tongue-in-cheek at times to a sobering look in the mirror at others. Either way, there is something for everyone no matter what walk of life or take on the world.”

Kid Kapichi sold out seven of their gigs and played to packed out venues, before COVID stopped everything. It was a cruel blow at such a crucial time.

Already working on a second album to follow up on the runaway success of their first record; Kid Kapichi have also announced headline shows for November. Grab a ticket with Gigantic, and look forward to enjoying their feracious live experience, plus maybe hear new tunes too!