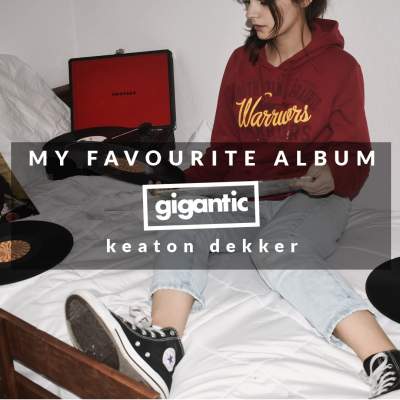 Gigantic shares your passion for music and we search out the most engaging musicians to discover the records that shaped their sound with our My Favourite Album blog. This time, we are thrilled to be joined by rising alt popstar keaton dekker.

Combing R&B and dream pop with a brooding electronica feel, dekker feels that DIY is the only way to truly express himself and so records and produces all of his own work. His independent spirit has seen him curate his very own festival “v_01d” for the past three years – no mean feat for a young artist aged just 20 years old!

Get excited – this week sees the release of keaton dekker’s brand new debut ep ‘the unwelcome series’! Recorded in his very own bedroom studio, these essential episodes of songs capture a unique coming of age story for keaton as he explores the raw edge of Gen-Z relationships in the digital era and makes self-defining statements as the new artist you need to know.

‘the unwelcome series’ benefits from the assistance of some series talent, having been mixed and mastered by Tim Rowkins (Rina Sawayama) and Robin Schmit (The 1975). Dropping on Friday 18th of September, CLICK HERE to stream!

I remember buying it on iTunes when I was 12 after asking my mum, and then playing it out of my iPod touch whilst I took a shower. It was obviously the worst time to listen to an album for the first time, but even when hearing it through the shower I had heard enough to still be wowed. listening afterwards with earphones was magic for me then and still is now.

A lot of things. It was definitely a close friend of mine in my teens. So many layers of sounds that felt so ambient yet monstrous, paired with these intimate vocals. I'd walk to and from school with this album in my ears, hangout, work, dance with it on. It was beside me whilst also allowing me to completely daydream too - which is exactly what I needed then.

‘The Pull’ is the perfect intro. It sets up this sonic palette that I remember blew my mind the first time I heard it, to hear that develop and shift as the record goes on is something I found so surreal. Some of my favourite music is in this album, lots of moments that feel way bigger than you and lyrical topics that reference itself throughout different parts of the album. ‘But I Do’ is a big one for me, also the b-side ‘Shifting’, which might be my favourite if it counts?

Well, I wasn't going to say anything but yes.. I did photoshop the album cover into the picture I sent you. But I've ordered the record. It evidently hasn't come yet but I thought this would be the next best thing? excited for it to actually be in my hands soon