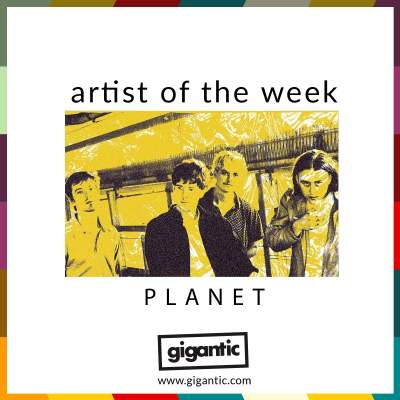 Recalling the halcyon days of indie and injecting it with a fresh attitude for the new generation – PLANET are the Sydney based fourpiece band that are adored by listeners around the globe. Their winning combination of fey emotional lyrics and rock n’ roll attitude has electrified such festivals as The Great Escape, Hit The North, Liverpool Sound City plus Stag & Dagger, boosting the crowds at their already packed out gigs.

The need-to-know band have just dropped their new EP ‘Maybe Someday’ which is a masterclass in effortless cool which they promote with UK headline dates in June – grab your ticket with Gigantic now!

It was the release of their huge anthem ‘Achingly Beautiful’ which channelled elements of dream pop that saw them begin to grab serious attention as they were championed by such major names as Rolling Stone Australia.

Earlier in the year, PLANET released their most ambitious record to date – their ‘Maybe Someday’ EP! Including the singles ‘Never New’, ‘Reason Why’ and ‘Imaginary’; the five-track record saw the boys really flesh out their sound and begin to achieve their ambitions of reaching the huge audience they deserve.

“We knew heading into the studio that we wanted the tracks to sound really big with even more pop influences than previous releases. I think we ended up with five tracks that are true and honest to our sound, but also start to delve into areas of production and music composition we’re all definitely excited to further explore.” – Tom Peppitt

With the release of ‘Maybe Someday’, PLANET have proven themselves to be amongst the most exciting rising bands on Earth right now. Be sure to see them when they head on over to the UK to promote their new material with headline shows next summer, tickets available with Gigantic now!

“We’ve really upped our live game over the last year and the first few tour rehearsals we’ve already had are getting us all really keen for this year.” – Tom Peppitt