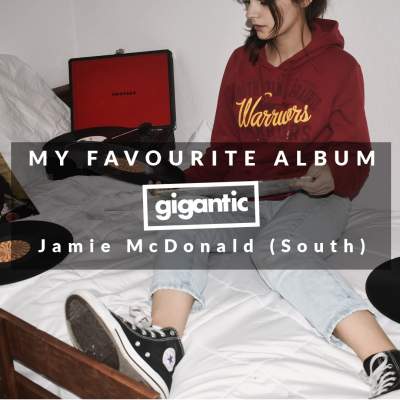 Joining us for My Favourite Album is Jamie McDonald, multi-instrumentalist from seminal indie band South and radio presenter!

Inspired by the innovation and soul of the Madchester sound, North London lads Joel Cadbury, Brett Shaw and Jamie McDonald formed South at the turn of the millennium. Combining rave and melodic guitars, they channelled the best of the past whilst looking forward to the future.

Whilst they only enjoyed modest success at home they had a huge worldwide impact, most notably in the U.S. where their definitively British sound resonated most, plus Germany and Japan. Over the course of four years, South would release four highly acclaimed albums whilst also diving headlong into international tours, with their music featuring on classic gangster movie Sexy Best and seminal teen drama The O.C.

This month sees the release of not one but two essential records celebrating the heritage of this premiere band, including a unique vinyl re-cut of their essential debut album From Here On. This very special version of From Here On In will be out on iconic indie label Club AC30 on Monday 26th of March – exactly 20 years to the day of it’s original release. CLICK HERE to pre-order you copy.

Plus, they also drop their compilation album From Here On Out which includes a selection of the best B-sides, rarities plus demos and is a true treasure trove for all dedicated fans. From Here On Out is also released the same day – both are limited to just 500 copies!

I remember listening to this album for the first time at Joel's house (Joel the singer from South) We listened to a lot of records/music at his place growing up.

This album changed music for me. I had probably been listening to more American bands than British up to this point but upon discovering the stone roses (probably a couple of years after its release around the age of 14?) everything seemed to slot into place. It represented songs, beats, feel, musicianship and it  just oozed confidence and cool and it was from up the road. Quite a bit up the road, but still! I related to it in a big way, and it was the kind of music I wanted to make.

Talk Us Through Your Favourite Songs And Lyrics On The Album?

I still get goosebumps when I haven't listened to it in a while and begin the record, turn it up and hear the atmosphere creep in of “I Wanna Be Adored”, followed by the baseline, the 4 to the floor kick, then the guitar, then vocal.. I do a show on my local radio station (Ramsgate Radio) based on the Golden Record ( a playlist sent into interstellar space to represent earth should any extra-terrestrial civilisation ever pick it up) and I genuinely, genuinely would include I wanna be adored. Its perfect. Every track benefits my spirit in a different way. “Shoot You Down” and “I Am The Resurrection” are particularly big songs for me.

As for lyrics.... difficult to single any out, but “This Is The One”.... pure, personal and anthemic all at the same time.

They were each outstanding musicians  in their own right with fantastic individual style, and then together, they were considerably more than the sum of their parts. I will be returning to this album for the rest of life, no doubt. You can hear it was recorded 30 years ago, but it is, and will be timeless. It is easily one of my most played albums, I can remember the first time I listened to it, the last time i listened to it and I can remember listening to it all through my life and in different parts of the world, at different times of my life. Its part of me.