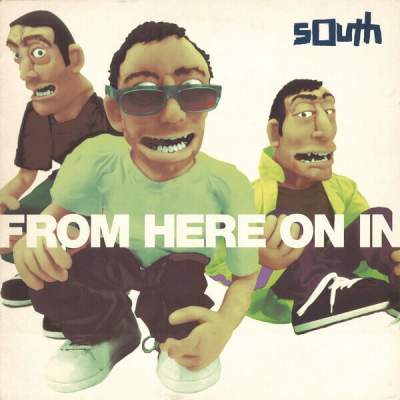 They called themselves South as a statement; an act of bravado. Come and have a go if you think you’re hard enough. Manchester bands had dominated for two decades, be it the Smiths, New Order, the Stone Roses, the Happy Mondays, and of course Oasis. Now it was the turn of three lads from North London. Move over Madchester.

Although commercial success eluded them in the UK, South soared abroad - notably in the US, Germany and Japan. They toured the world with Elbow - one night South would top the bill, the next night it would be Elbow's turn. Guy Garvey would always dedicate a song to them from the stage "because they're real". In the US, their prominence was partly due to the fact that they composed the soundtrack to the smash gangster movie Sexy Beast, and that their biggest single Paint The Silence featured on the teen drama TV series The OC. When South split up in 2008 - four albums and a decade down the line - they had a back catalogue to be proud of. And twenty years on from its release, their debut album From Here On In sounds as fresh as the day it was first pressed in 2001.

Despite the swagger in their name, South couldn’t have been less laddish or pugilistic. All three were quietly spoken, thoughtful, serious minded. Proper musicians. The trio got together at Haverstock School in Chalk Farm, a stone’s throw from Camden Town. Lead singer Joel Cadbury, Brett Shaw, and Jamie McDonald were all multi-instrumentalists who divvied up the guitars, bass, percussion and keyboards as and when they liked. Initially they would go around to Joel’s house after school and rehearse in the basement or in his bedroom. They originally saw themselves as an electronic act, before morphing into a crusty-haired grunge band. They got a regular spot at the St Moritz Club on the legendary Wardour Street in 1998 and evolved again - less thrashing, more acoustic, tingling guitars, and sublime harmonies. Within weeks of starting at the St Moritz they had signed a publishing deal with Warner Chappell.

Their manager John Brice went to see Mo’Wax founder James lavelle about a drum and bass artist he was trying to get signed up. Lavelle said what he really wanted was a band. Brice said I’ve got just the thing for you, played him a handful of South tracks, and the man from UNKLE gave them a record deal on back of those five tracks.

For all that South eschewed the North, they would have been perfectly at home in Manchester. You can hear the influences of the great Manchester bands on From Here On In - the tender Gallagheresque ballad Keep Close; the gorgeous Paint the Silence nodding to the Stone Roses.

Yet at the same time they brought so much extra to the party - dance beats in thumping rock rock songs; acoustic ballads that blaze ferociously; the instrumental electro pop of Broken Head that not only bookends the album, (parts 1 and III) but also splits it down it the middle (part 11). At the end of Broken Head (part 1), we hear a random but resonant establishment voice tell us: “It’s a disenchanted, restless insecure generation continually searching for new kicks.” It makes no sense yet makes perfect sense at the same time. The quote was found by the band on a 1960s library record about the effect of LSD on sixties youth, which says a great deal about their meticulous approach to making music and the breadth of their frame of reference.

The song titles nod to 70s prog rock ((Broken Head, Run on Time, Paint the Silence), the lyrics are abstract but full of yearning melancholy, and the album is united by reprises of earlier songs. Rather than a linear progression, it folds in on itself and ultimately circles itself with its leitmotifs - the end takes you back to the beginning, so as a listener you do the obvious thing - play it again. From Here On In is as much an extended metaphysical poem as a banging rock album. If John Donne had been around 400 years later, he might have come up with something akin to this.

The reviews were sensational, particularly in America. “The tempos were stately. the lyrics suitably doleful and warmhearted,” said the New York Times. The Chicago Tribune eulogised about “the dreamy atmospheric mix of pensive acoustic songcraft and electronic soundscaping.” Meanwhile Billboard said: “Every now and then a band comes along that prides itself on not fully ascribing to any one musical philosophy. Welcome to the world of north London’s south.”

From Here On In was the perfect post-modern album - ballads to rave to, dance tracks to mourn to, pop rock, electro-rock, folk-rock, instrumental rock, prog rock, and even occasionally rock rock. In many ways the album was decades ahead of itself. Perhaps its time has come now.