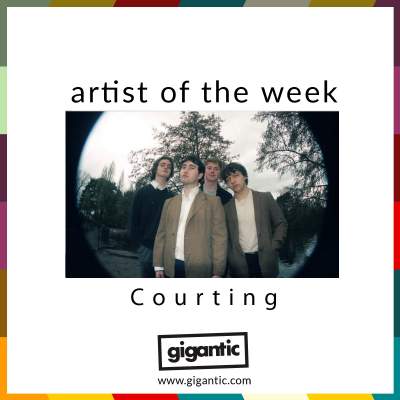 Combing punchy rhythm and caustic humour, Courting are the new name from Liverpool fast becoming known as the biggest breakthrough band of 2021! This year sees the release of their highly anticipated debut EP Grand National which they promote with a headline tour in September plus festival appearance – tickets on sale with Gigantic!

Teenage wunderkinds Courting are the new offering from the next generation of post punk bursting out of Liverpool. Drawing comparisons to Parquet Court and Pavement, their songs address politics and society with a cynical lens and a wry humour, seeing early singles “Football” and “David Byrne’s Badside” already wracking up the large numbers in streams.

Their mix of boisterous Britpop revival and raw garage rock and has seen them earn support slots for the likes of FEET, Sports Team and Heavy Lungs, positioning them as the new cult band that everyone is talking about.

Courting kicked off the year with the release of their latest single “PopShop!” which singer Sean explains is their sardonic takedown of the worst aspects of the music industry; “​Popshop! is about the music industry. The idea of selling out and consumerism. The name is derived from Keith Haring’s store of the same name. And the idea that it is positive for your art to be consumed by a larger audience. Rather than only seen as something for upper class art collectors or something to buy for its future resale value. We’re also poking fun at bands writing the same song over and over again. And wishing that we could sell our bathwater like Belle Delphine.”

Next month, Courting will drop their debut EP Grand National which is expected to reveal an even wider dimension to this hot new band and will make them one of the biggest breakthrough acts of 2021.

Make sure you don’t miss your chance to see hot new band Courting as they rise to the top. They have announced a tour in September, tickets on sale with Gigantic right now. Plus, they will be appearing at Sonic Wave Festival which hits all the best Birmingham on the 11th of December – we can’t wait!