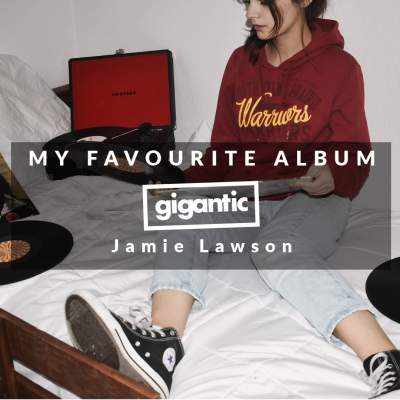 Welcome back to Gigantic’s My Favourite Album blog, and this time round we are very honoured to have a contribution from world famous singer/songwriter Jamie Lawson!

Blending folk with a heart-warming indie pop feel, Jamie Lawson built an online following after uploading his ‘Fussy’ demo which caught the attention of stateside college radio before releasing debut album ‘Last Night Stars’ and then subsequent records ‘The Pull Of The Moon’ and ‘Wasn’t Expecting That’.

Following his signing to Ed Sheeran’s label Gingerbread Man Records, Lawson has achieved international fame most notably for his Gold selling eponymously titled album which hit No. 1 in the UK charts and included the best-selling single ‘Wasn’t Expecting That’. He has since released further albums ‘Happy Accidents’ and ‘The Years In Between’, both a critical and commercial success.

The week of its release, it was on a listening post in Virgin Records in the City Centre. I was at art college at the time and I’d read about this guy Mark Eitzel as a brilliant miserable singer songwriter, I think the album had been reviewed highly in Mojo magazine and it sounded right up my street. So, every lunch break I would walk down from the art college to the record shop and listen to it. It was on that listening post for two weeks. At the end of those two weeks I bought the album and left art college.

It changed my life. There was something about those songs, the way they were sang, the emotion of it, that made me, “think maybe I should be doing this?” That’s why I left art college. Pretty soon after that I moved to London to start chasing dreams. And a few of them came true.

Talk Us Through Your Favourite Songs On The Album.

Where to start?! First off here’s the weird thing. Mark Eitzel is a music critics dream. Once made Rolling Stone songwriter of the year. His band American Music Club were lauded by all the music press and yet never really broke through. He is a genius song writer and this album starts with a cover version. I didn’t know that at the time. I was just drawn in by this voice that sounded like gravel made with silk. It’s a stunning version of the Carole King song ‘No Easy Way Down’. Dusty Springfield did a great version of it too but it was someone else’s song that originally pulled me in.

‘Mission Rocket Resort’ was the killer though, something about that song told me this guy had seen some shit and not all of it was good. “You’re worried if you remember to use bleach on a needle, well so what, so what, so what?” It was heavy stuff. At the time I was in a pretty weird place, my father had died the year before, I was unhappy doing something I thought I would really enjoy in photography and didn’t really know what to do with my life. These songs had life experience and hurt and heart and soul. I wanted to be a part of that world in some way.

‘Cleopatra Jones’ was another favourite - “Cleopatra only answers to a higher source from above, a sensitivity to bright light and unfounded belief in love.” Who else writes lyrics like that? Just brilliant.

Anything else you want to add about the album?

Go get it. And when you’ve listened to that go find more. His back catalogue is full of brilliance. This album introduced me to his former band American Music Club and I fell in love with their music too. His last album ‘Hey Mr. Ferryman’ was produced by Bernard Butler and is up there with his best.