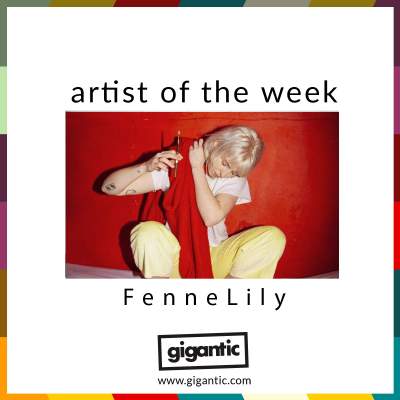 Bristol is seemingly an endless source of creativity and singer songwriter Fenne Lily is yet another example of the abundant talent springing from the South West city. Sometimes achingly beautiful and revealing strength through vulnerability, other times dark, stormy and tumultuous; Lily’s music explores her own experiences as a young woman and defines herself through her own unique fusion of folk and indie pop.

Despite being aged only 23, she has already amassed more than 20 million streams on Spotify as devoted fans avidly listen to her debut album ‘On Hold’ plus brand-new singles ‘Hypochondriac’ and ‘To Be A Woman Pt.2’.

Like most guitarists, Fenne Lily first began playing as a teen whilst she was growing up in the Dorset countryside and immediately found she had a natural affinity to the instrument. With a lot of time and few other disruptions to her concentration, the long hours of practice developed her skills as a songwriter which she felt ready to take to the next level.

“Growing up in the countryside was amazing. I had so much space and loads of time with no distractions – that’s why I learnt an instrument, because I didn’t have anything else to do!”

Whilst still only 16, Lily self-released the song ‘Top To Toe’ which spoke about adolescent social anxiety. Her soft voice and light strumming technique demanding attention through its sheer honesty, drawing the listener in to her intimate world. By quietly tapping into shared experiences, she quickly attracted widespread praise from critics and also created a grassroots fanbase. This did not go unnoticed by Burberry who asked her to perform at their Paris shows, revealing her to a truly global audience plus led to her playing support for the likes of C Duncan, KT Tunstall, and Marika Hackman.

Two year later, Lily would celebrate her coming of age by starting an art foundation course during 2018 which saw her move to Bristol – a city famed for its deep creative veins. Finding more expressive outlets, Lily linked her work and began promoting her music with her own photography as she immersed herself in the local scene. The same year would see the release of her first album ‘On Hold’ which saw her try a range of styles and expand on her pervious folk centric sound.

“I don’t want to be a folk singer, even though that’s what comes easy to me. I don’t want to disappoint the people who liked that ‘Top To Toe’, but I don’t want to become pigeonholed. My music comes from anger, but I can’t sing angrily, so I sing sadly. It’s a sadness that’s fuelled by fury.”

Continuing her insightful self-expression, this year has seen the return of Fenne Lily having signed to Dead Oceans and the first release was the single ‘Hypochondriac’. Lily explains that the new indie pop song ‘Hypochondriac’ is about the “pressure to feel enough but not too much in a time of hyper connectivity, plus a personal reminder to be accountable for and have agency over the part of me that gravitates towards meltdown. It’s the first in a collection of tracks addressing myself as both the cause of and solution to my anxieties, as well as a shift in attention from predominantly relationship-based writing to a more self-reflective dialogue.”

The brilliant Bristolian soon followed up with second single ‘To Be A Woman Pt.2’ which sees her transform a dark period due to a dangerous relationship into a declaration of independent strength; “It’s raw and furious, coming from a place of frustration and pain born from a loss of control and a breach of trust. The result of a manipulative relationship, it’s both a retaliation against subordination and a reclamation of power. Usually when writing about rage, most of the initial anger I feel towards the person or situation becomes diluted through the recording process,” she continued. “But this song was different.”

Giving all the signs of a second album on the way, in addition to the release of these new songs she also announces a tour kicking off later in the year.