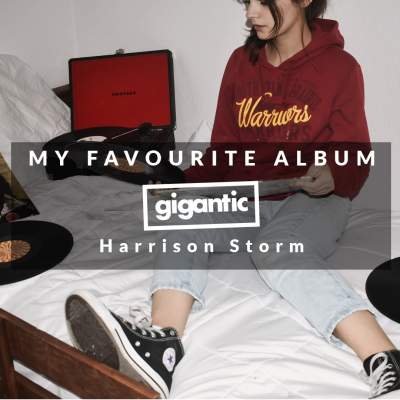 Welcome back to another insightful instalment of My Favourite Album, brought to you this week by Harrison Storm!

The pop folk music of Australian songwriter Harrison Storm captures all the tumultuous coastal swells and emotive stormy surges you can imagine characterise his quaint seaside hometown of Mornington.

This year has seen Storm release his remarkable five track EP “Be Slow”. A journey to the peaceful inner soul of a young musician finding his place in the world, the songs have a dreamy tenderness and possess the rapturous adventurous energy of enjoying new experiences for the first time.

It includes his latest single With You which has just dropped this month and is an unashamed wide eyed love song, expressing all the passion and excitement exploding in his heart a newfound romance can cause.

“Be Slow” is out now via Nettwerk Records. CLICK HERE to stream and download your own copy of his wonderful new record.

Ben Howard – “I Forget Where We Were”

I was already a huge fan of Ben’s first album and was really excited for his next full-length release. I think I was at my parent’s place when I listened to it in its entirety. It took a while to grow on me but after reading the lyrics and sitting with the songs for a few weeks it became one of my favourite collections of songs to date.

It was released during the time when I was recording my very first EP in my friend's parent’s garage which he converted to a studio. A really impressionable time for me.  I remember being so inspired by his song writing and the artistry in the songs. Over the years, the album came along with me over pivotal points in my life and was the soundtrack to so many different circumstances. It was the only cd in my car for years and I was so happy that was the case. I listened to it on repeat constantly.

It’s so hard to choose a favourite, I feel like there's quite a spread of emotions contained in this record, so it really depends on what I'm feeling at the time of listening. The opening track Small Things always hits home for me, especially the lyric

As an artist myself, I’m constantly learning I don't have to suffer for my art, and it takes time to really let this sink into your body and psyche. So whatever Ben meant in that song, that's what I took away from it. Another favourite is Conrad and the lyric

‘Climb out, out to where you see, the curl of the world’

I really tied this lyric with trying to have a greater perspective on whatever I was having trouble with over the years, trying to shift my own perspective. It was something that helped a lot.

It’s funny listening to this record now, 6 years since it’s been released and seeing how I'm impacted in different ways. Songs and lyrics that really hit me are shifting and I’m taking a liking to different aspects of the record. It still blows my mind that I can listen to the record and not get bored, finding new ways to get something from it and be moved. I strive to have that quality in my own music.