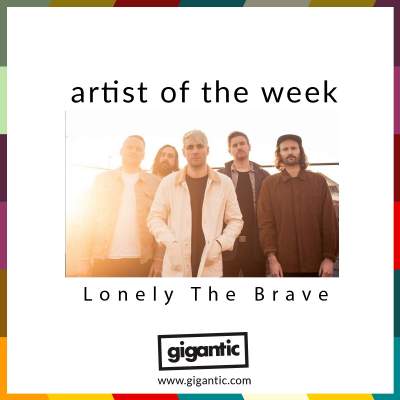 Lonely The Brave command the loyalty of a huge fanbase, thanks to their impressive song writing skills which they use to create emotionally charged widescreen anthems as heard on their top selling albums The Day's War and Things Will Matter.

Having nearly been broken with the departure of their singer two years ago, the band now looks to the future with the release of their third album The Hope List, which comes out early next year and is supported by a Spring 2020 tour. Lonely The Brave tickets are on sale now with Gigantic!

Cambridge five-piece Lonely The Brave are renowned for masterly creating epic anthems which embody a sense of adventure, passion and take emotional resonance to a whole new level. Formed in 2008, their meteoric rise has seen them release albums The Day's War and Things Will Matter, both of which hit #1 in the Rock Charts.

Yet despite the huge success, two years ago frontman David Jakes penned a heartfelt email to fans stating his reasons why he felt compelled to leave the group, citing mental health issues as the cause. Fearing that the band was over, fans were greeted the news that Jack Bennett would be the new singer with cautious optimism.

Unsure how their favourite band would now sound with a key component forever changed, Lonely The Brave have more than risen to the challenge and returned with some of their best work yet.

Last month saw the release of their new Bright Eyes EP, four new track which reveal the alt rockers at their best. Included is lead single which gives the EP its name, which is an impassioned plea for empathy and understanding in the era of digital outrage causing rising online tensions.

"Bright Eyes was a song that came together about the importance of listening. Are we just trying to one up each other? Are we really just pointing people out now? What happened to being conversational?! It was a look into social and targeted media and people simply adhering to it rather than looking or talking about evidence and facts and considering the other side of things." – Jack Bennett

The title track is taken from their forthcoming third album The Hope List, which is scheduled for release on January 22nd on Easy Life Records. Reported to be an emotional explosion, the upcoming album also includes the very impressive singles “Bound”, “Distant Light” and “Open Door” which prove they’re on course for yet another hit record.

“Given everything that’s happened to this band, it would have been remiss of us to try rushing into this or do something that wasn’t right. It takes time. We’ve been a band for over 10 years and stuck in our ways a lot.

There has been a huge shift in dynamic now. It’s a completely different vibe from where we were before. There’s a renewed energy and a renewed focus. Everything feels very positive in the Lonely The Brave camp.” – Mark Trotter

We can’t wait to hear the new Lonely The Brave record when it drops next year. They showcase their latest LP The Hope List with a huge headline tour – tickets are on sale with Gigantic right now!