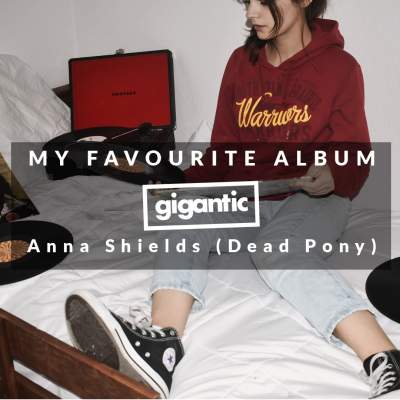 Gigantic talks to essential artists and key people in the music industry to talk about the most inspiring records. For this edition of My Favourite Album, we speak to Anna Shields from rising stars Dead Pony.

Singer and guitarist Anna is joined by Blair Crichton (lead guitar, backing vocals), Aidan McAllister (drums) and Liam Adams (bass) to become Dead Pony. Fusing the raw power of grunge with angular post punk riffs, Dead Pony create their unique alternative anthems which a bristling with attitude, making them one of the most exciting bands currently making new noise on the scene.

Signed to LAB Records; check out explosive singles “Everything is Easy”, “23, Never Me”, “Sharp Tongues” and “Speak Of The Devil” to get just a taste of the Glaswegian gang’s huge potential which tackle thorny issues of depression, alienation, toxic relationships and youth rebellion. It’s their impressive ability to channel anger into truly satisfying burst of rage with addictive pop hooks that has already got critics calling them the most important rising band of the year – all before they’ve even dropped their debut album!

My mum used to listen to the Talking Heads while doing housework when I was growing up, so I always knew a lot of the songs from the album. However, it was in my second year of uni that my lecturer Jim Prime played us the Stop Making Sense movie in class, and I was absolutely blown away by it. I couldn’t believe it had taken me 22 years to get right into the Talking Heads but from that moment, this album quickly became my favourite and I listened to it on repeat for a solid year.

I think that even though I didn’t actively listen to this album from start to finish until I was around 22, it still played some part in my musical influences growing up. I have very fond memories of my mum dancing to “Psycho Killer” while ironing when I was a wee girl and how much joy it brought her and I still feel nostalgic when I listen to it today.

When I began actively listening to this album however, it came at a point in my life where I was experimenting with my style and musical influences to try and figure out who I was and what type of music I wanted to make. I was so inspired by David Byrne and his unique and careless stage presence and I think that influence still seeps through in my performance style today.

My favourite song from the album has always been Life During Wartime. I think that the Talking Heads managed to create something that every band wants to recreate and that is a perfectly orchestrated and in sync live show without seeming too over rehearsed and still feeling loose and lively.

Sonically, I love the energetic and bright funk elements to the music and how this is juxtaposed with the very gloomy, post-apocalyptic world that David Byrne portrays through his lyrics.

My favourite lyric from “Life During Wartime” is  -

“I’ve got some groceries,

To last a couple of days

But I ain’t got no speakers,

Ain’t got no headphones,

Ain’t got no records to play”

I think this short excerpt captures the passion that David Byrne and the band had for their music and performance. In essence, he is saying “we’ve got the basic essentials to survive through this but what’s the point if we don’t have music” and although portrayed in quite a light-hearted way, I think it puts into perspective how important music is and dull our lives would be without music in it.

I think if I could go back in time to any show in history it would be to see Stop Making Sense live. I am obsessed with the album and I think it would just be so magical to see it live. I did see David Byrne live a few years ago where he played some of the songs from this album live with his band and it was truly the best performance I have ever witnessed in my life.