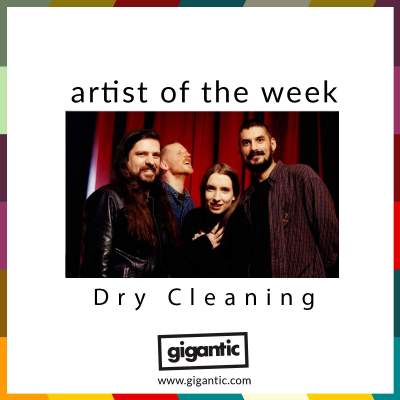 Drawing comparisons from everything from Talking Heads to Wire, Magazine and even Dr. John Cooper Clarke; Dry Cleaning have joined the 4AD roster – a label renowned for selecting only the most innovative acts.

With the release of their debut album New Long Leg in April, they have now announced a major headline tour in support of their first record which kicks off early next year, tickets already selling fast with Gigantic!

Formed in 2018, Dry Cleaning were immediately swept up in the post punk resurgence that is currently underway, despite being decidedly different. Rather than the shouted polemics or stage diving antics of others, their performances are a strangely satisfying mix of savage rhythms riding roughly over the stream of conscious spoken word of Florence Shaw which quickly caught the attention of fans and critics.

The following year saw the release of two EPs Boundary Road Snacks and Drinks and Sweet Princess; both revealing the special nature and immense potential of a newly arrived cult band. Next month sees the release of their highly anticipated debut album, which has now been named New Long Leg.

The upcoming ten track record is expecting to explore some of the worst aspects of the human experience, how we deal through grief and anxiety through dissociation and daydreaming. The album name further emphases the odd juxtaposition of extreme emotions with the crushingly every day, as Shaw explains “the title is ambiguous; a new long leg could be an expensive present or a growth or a table repair.”

New Long Leg also includes the single “Strong Feelings” which exhibits the band at its best, and Shaw says is ”about secretly being in love with someone who doesn’t know it, and Brexit’s disruptive role in romantic relationships.”

Following on from their impressive performance on the BBC 6music festival, Dry Cleaning have now announced their own headline tour in support of their coming debut album New Long Leg which drops in just a few weeks. Make sure you grab a ticket to one of their many upcoming headline shows and enjoy seeing the early rise of this soon to be great band.