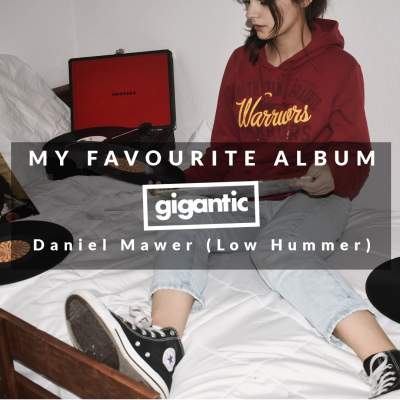 It’s a brand-new year and we are very excited to be back with the very first My Favourite Album blog of 2021, brought to you curtesy of Daniel Mawer – guitarist, singer and songwriter from Low Hummer!

Combing the effortlessly cool of new wave glamour with infectious indie pop and the savage side of post punk; Hull based quintet Low Hummer have been marked as one of the biggest breakthrough acts for 2021. This follows an incredible year which has seen the release of such powerful singles as “Take Arms” which featured on the NME New Banger playlist, plus “Sometimes I Wish (I Was a Different Person)” which has been championed by Huw Stephens and Jack Saunders on their BBC Radio 1 shows.

It’s the combination of true northern grit with sardonic style and truly addictive sounds that makes Low Hummer so appealing, and will no doubt blow up over the next twelve months! Also, CLICK HERE to check out their newly released merch line including hot T-shirt designs which have just dropped this week!

I’d grown up hearing The Beach Boys on television and the radio, but my first real musical awakening (no offence Green Day and Linkin Park) had more to do with The Libertines, The Strokes, Joy Division and The Smiths, along with basically anyone in a band during the noughties who wore converse.

It wasn’t until I was eighteen, nicking a lift to college from my Mum, that I realised I was ready to take Pet Sounds in.

It was my duty as a teenager to critique my Mum’s music taste, I’d snobbily call it out at every opportunity, and on first listen I’d have most likely scoffed at Pet Sounds, just like I did with plenty of my Mum’s favourite bands, before gradually maturing and falling in love with most of her recommendations.

Pet Sounds crept into my psyche over the course of a decade. And it’s because it’s untouchable.

Whilst I would end up emulating most of my indie heroes pretty easily, (mainly by playing three chords and pointing my legs inwards whilst onstage) ripping off Pet Sounds seemed unfathomable to a none-musician like me.

The harmonies are the first thing that hit me listening now. The vocal arrangements on “Wouldn’t It Be Nice” felt completely alien on first inspection (YouTube search ‘wouldn’t it be nice vocals only’)

It’s tricky to sing even the main melodies on your own, I often consciously realise I sound like my cat when I sing along to them in the car, so it’s no surprise that it took the band an entire weeks’ dedication to finish the vocals just for the first song on the album.

Then there’s the lyrics. Brian Wilson and Tony Asher manage to portray feelings so beautifully, whether explaining a coming-of-age scenario like the song “That’s Not Me” or debating the way people change and lose a bit of themselves when they leave their hometown to big cities like New York on “Caroline, No”.

That’s undoubtedly thanks to Tony Asher’s background writing predominantly advertising jingles, where I imagine you have to convey the product well with the little choice of lines you have.

The way they can say something universally so well in one sentence is what has really stuck with me, and something I try to convey in a lot of Low Hummer songs.

Phrases like ‘sometimes I feel very sad’ on “I Just Wasn’t Made For These Times” hit my heart every time but there are plenty of one liners on this album that are utterly heart breaking.

‘I try hard to be strong but sometimes I fail myself’

‘I remember how you used to say, you’d never change, but that’s not true’

‘Each time things start to happen again, I think I’ve got something going for myself, but what goes wrong?’

There’s no beating around the bush with similes and metaphors, each line is a brutally honest declaration, a frank admission, like an open wound that makes this album so universal.

Then there’s the arrangements. Wandering key changes and tempos, confusing note changes in specific instrument parts, it’s a challenging listen that takes what sometimes feels like an upbeat song on a retrospective journey.

This album is all in the ‘pop’ category but fits perfectly with Spectors phrase of “little symphonies for the kids”.

The wild variety of sounds on this album is immaculate, and there’s so much going on. Harpsichords, flutes, mandolins, coke bottles, vibraphones, intro’s like you still believe in me where a plucked open piano string sets the tone for songs beautifully.

The ‘wall of sound’ element of Pet Sounds that Wilson had fallen in love with and managed to portray thanks to his probably unhealthy obsession with Phil Spector, means you have the wrecking crew, some of the eras most talented musicians, all over this album, in a studio infamous with the sound of the 60s and Spectors’ recording techniques.

Whilst the lyrics are always relatable to me, the American musician’s soundscape specifically the guitar playing within the beach boys repertoire remind me of palm trees and water, along with the immaculate recording techniques on show this album feel like a gift from another planet to a lad born in Hull.

“Let’s Go Away For A While” is absolutely stunning as a piece of music, I have to catch my breath just listening to it and frankly it was probably the first instrumental track which opened my mind to all sorts of other music.

To draw influence from that wall of sound is possible, plenty have, but the digital way in which we record today means the gorgeous spill of instruments and use of the specific reverb chambers and sound you could create only at gold star studios means nobody can ever fully recreate an album like this, which is of its time.

I’ve read Spector himself once tried and failed decades later.

It’s worth noting that my love of tortured souls means that I am biased to Brian Wilson’s plight, the album was arguably the peak of his powers before falling off the other side of the perilous cliff, listening to the smile sessions is almost a harrowing experience of someone’s retrospective youth captured on one album, falling away into extreme paranoia and bleak mental state not long after.

My favourite song of all time. From a lyrical standpoint I believe it’s perfect, from an instrument perspective, gorgeous, it’s an example of how good a song can be, it flows so well and effortlessly.

But still utterly untouchable to recreate well down at musician’s night at the Adelphi club (free every Monday at the Adelphi post COVID shit show) although I’m sure our guitarist John has given it a go a good few times.

Anyway, enough waffle. Here’s to Pet Sounds by The Beach Boys. Ya beautiful bastards. (Let’s not mention sloop John b though yeah)’