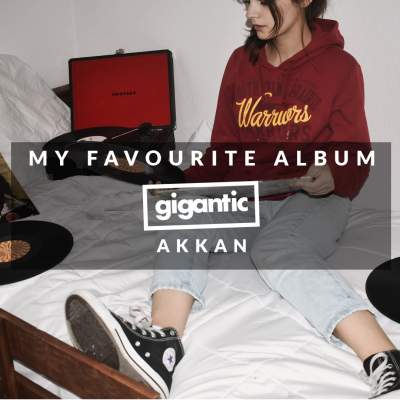 Gigantic continues to reach out to innovators with a passion for music to discover the most interesting sounds, and this week on My Favourite Album we are joined by experimental electronica duo AKKAN.

Based in the vibrant cultural hub of Barcelona, producer pairing BeGun and Ocellot have created their own idiosyncratic sound which could loosely be described as tribal deep house and their grooves have been exciting listeners right across Europe and beyond!

Fans are eagerly awaiting their eponymously titled debut album which includes the crystalline single ‘ANIMA’ which includes a vocal contribution from Nicola Cruz-collaborator Huaira. Scheduled for release in December through Foehn Records, expect a fresh take on experimental electronic beats which fuse tradition sounds from Asia and the Far East into vibrant rhythms. CLICK HERE to pre-order your copy of AKKAN's debut album.

‘Utakata No Hibi’ an album by Mariah.

A few years ago, in a friend’s house in Berlin. He just played the vinyl and it was magic, we were silent till the last song… and then talking for hours about it.

I grew up loving comic books. When I first watched ‘Akira’ by Katsuhiro Otomo, I went straight away to buy the OST CD by Geimoh Yamashirogumi. That sound of the D50 and digital synths with those bamboo percussions was something new for me. Pure fantasy. I would listen to it a lot. When now, as an adult, I listen to ‘Utakata No Hibi’, I somehow travel to that same fantasy world. Actually, it is amazing to think that they were made the same year 1983.

It is an album that I still listen to a lot. It simply makes me feel good. There are not many albums that you can listen to forever and don't get bored... and that is definitely one of them. Such a surreal sound and melodic at the same time. The songs are a perfect collage of abstract sounds that give shape to pop songs and it sounds so natural and effortless. It’s very inspiring to me.

This is an album that I always listen to from the beginning to end. It makes total sense as a whole. It travels through many different styles being all of them coherent. ‘Hana Ga Saitara’ is a perfect example of this genre fusion, mixed in such an elegant way. Japanese and Armenian percussion, synths, a saxophone all sewed together with upbeat and dancy grooves.

Just to mention that Yasuaki Shimizu, the leader of the band at the time, released an album called ‘Kakashi’ just the year before releasing ‘Utakata No Hibi’ with Mariah. This one is another absolute masterpiece. We would recommend to give it a go.