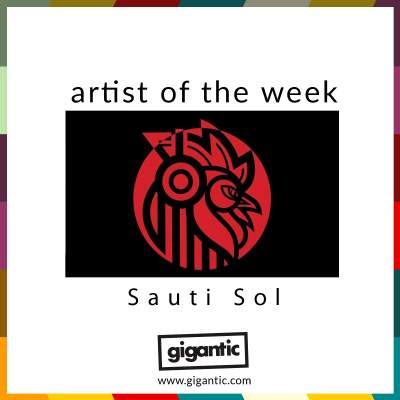 Leading the way for Afro-pop; Sauti Sol represent the very best of the East African pop music scene. The award-winning group have been named of Best African Act at the MTV EMAs, played packed out shows all over the world and now release their phenomenal new album ‘Midnight Train’ – a euphoric 42 minute essential listen which they promote with UK gigs next year!

"Our inspiration comes from where we're at in our lives and what we go through as human beings, as men, as husbands to our wives, as friends. It's about writing stories that relate with other people and things people would not normally speak about in song. We try to put that in song." – Polycarp Otieno

Originally an a cappella group, Sauti Sol ("Voices in the Sun") was formed in 2005 by Nairobi born schoolfriends Bien-Aimé Baraza, Willis Chimano and Savara Mudigi who began to take the band more seriously after meeting guitarist Polycarp Otieno. Feeling the chemistry was right, they enlisted in the Spotlight on Kenyan Music competition which massively raised their profile after they were included in the compilation album leading to signing to the Penya Records label.

It would be the beginning of a meteoric rise, and Sauti Sol would release debut album ‘Mwanzo’ in 2008 then follow up LP ‘Sol Filosofia’ three years later. They would capture the hearts of listeners across the continent and in 2014 they would win the illustrious title of Best African Act at the MTV EMAs.

Knowing that the world was eager for me, they made third album ‘Live And Die in Afrika’ a free download for 48 hours upon release at the end of 2015 through their own imprint label Sauti Sol Entertainment – a truly staggering 400,000 copies were grabbed! Their success continued with their highly acclaimed ‘Afrikan Sauce’ record at the beginning of 2019.

It’s been a tumultuous year the world over, but thankfully we have a ray of sunshine in the form of the Kenyan bands wonderfully uplifting new album ‘Midnight Train’. Expanding their sound having benefitted from now signing to major label Universal Music Africa, their latest LP explores electro, smooth soul, R&B plus sweeping folk ballads and includes input from India Arie, Sho Madjozi and Black Motion.

Check out title track ‘Midnight Train’, which includes a sample of Toto’s classic single ‘Africa’ and a powerful vocal contribution from the Soweto Gospel Choir, party starting song ‘Disco Matanga (Yambakhana)’ and ‘Suzanna’ which has sure-fire hit written all over it!

Don’t miss you chance to see Sauti Sol when they come to the UK in support of their new album ‘Midnight Train’. Playing headline dates throughout February – tickets are on sale with Gigantic right now!