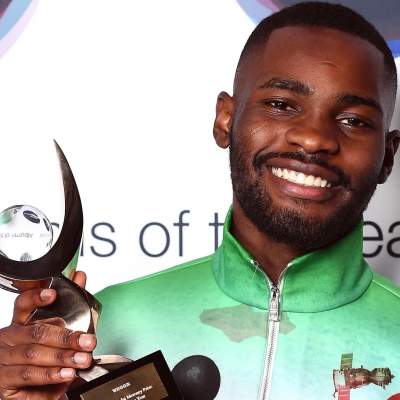 Considered a concept album, Omoregie addresses issues of mental health and the anxiety caused by the adversities in his life through the lens of an imagined therapy session. ‘Psychodrama’ details his very personal strife and the misfortunes affecting his family such as his elder brother being imprisoned. It recounts the struggles of black British youth and the tensions in working class communities created by alienation and over a decade of underfunding from policies of austerity.

Check out Dave accepting the Mercury Prize and calling his Mum on stage:

It has certainly already been a big year for Omoregie; the honesty of ‘Psychodrama’ chimed with audiences all around the UK and all four singles broke the Top 10. Released in March this year, it almost instantly became most-streamed first-week British rap album in the UK and is currently certified Gold boasting 23.6 million online streams – and that is just about to become a LOT more! Plus there was THAT Glastonbury performance on the Pyramid Stage.

Massive congratulations to Dave – but there were many other awesome acts that could have easily taken the title. One of the most popular bands in the running were Bristol tearaways IDLES. Having shot to prominence with their debut album ‘Brutalism’ in 2017, they quickly followed up with second LP ‘Joy As An Act Of Resistance’ which is a powerfully radiant post punk reaction to personal and political adversity that has caught the attention of critics and the public alike – plus the Mercury Prize of course! While they didn’t get to clutter their mantlepiece with the award this year, we do know that recording for their third album has just been finished. See you again in 2020 boys?

One of the most controversial performances of the night right from the start, irrepressible Northampton rapper slowthai (Tyron Frampton) walked on stage shouting “Fuck Boris” whilst holding aloft an apparently mock decapitated head of the widely maligned Prime Minister before running into the crowd and launching himself onto a table of spectators. His rowdy antics during ‘Doorman’ truly reflected both his raucous gigs plus his politically charged first album ‘Nothing Great About Britain’ and we should have expected some on (and off!) stage antics from his cheeky pre-ceremony Interview With NME. Frampton may not have taken the crown, but he certainly made sure everyone will be talking about him for a long time to come!

Whilst the Mercury Prize tends to favour brand new acts with the award typically going to those releasing their first album, it is often further down their career that a musician truly finds their voice. This year has seen the release of Simbi Ajikawo AKA Little Simz’s ‘Grey Area’ – yet another remarkable record for British hip hop and the critically acclaimed third album for the prodigious young rising star. Any other year, and it would be likely that she would have taken home the title and it would be wrong to underestimate just how compelling ‘Grey Area’ is and how it shows Ajikawo is on a trajectory for even greater things.

If the award was given for the passion of the live performance alone, then it would surely have been given to Anna Calvi. Playing ‘Don't Beat The Girl Out Of My Boy’ taken from her latest LP ‘Hunter’, Calvi fell to her knees in a colossal howl of emotion which will echo around the Eventim Apollo forever more. ‘Hunter’ delves deep into queer politics and explores aspects of gender identity and sexual freedom. This is Calvi’s third album, all of which have seen her named as a Mercury nominee but has yet to claim the coveted trophy for herself which must truly sting. But such an incredible run does highlight the sheer calibre of the work who will be regarded in hindsight as one of the true sparks of genius in this generation.

It has certainly been an excellent year for British and Irish music, and other essential acts that were in the running included Nao, Foals, The 1975, Black Midi, Cate Le Bon, Fontaines D.C. and Seed Ensemble. We applaud everyone nominated and a huge shout out to the winner – Dave!