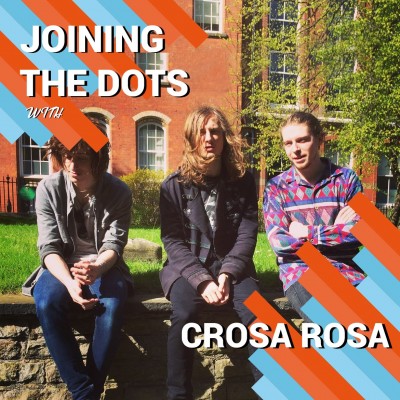 Crosa Rosa are a blistering new band from Nottingham having formed just over a year ago. Known for their psych sound and heavy use of distortion, the three piece features the vocal and guitar talents of Joe Weatherall (JW), drummer Kegan Clark (KC) and Joe Fisher on bass (JF).

Tipped for greatness, the band was prominently featured by Fred Perry Subculture in their New Noise 2016 article.

They have recently been selected to play the awesome Dot To Dot. An exciting festival taking place across three days in Manchester, Bristol and Nottingham city centres featuring massive bands like Mystery Jets, Augustines and The Temper Trap.

The festival is run by DHP Family. A live music promotion company based in Nottingham which has expanded to include venues in London and Bristol.

We talk to Crosa Rosa about their influences, being selected to play Dot To Dot and life in Nottingham.

You’re a band known for its heavily distorted psych sound. Who are your influences?

JF Each different I think. It makes to the whole sound of the band. Joe’s influences are dead similar to obviously both mine and Keegan’s but.. it branches off.

There might be some more extreme versions of garage rock which I listen to that these guys wouldn’t. They cover their ears when they hear it. And it’s the other way round where Kegan might listen to this really sort of math rocky or technical and I’ll be like urghhhhh get it off!

JF Like I say it branches off. Me and Joe actually started talking because he stopped thinking I was a dickhead because I wore a Nirvana shirt.

You’ve come a long way in a short time, how does it feel?

JW On the outside I think we are quite shy

KC I think that tends to surprise people as well because they always expect us to be screaming and running and then we’re sort of just silent.

KC It’s that thing isn’t it. Like, for me personally, I find it really hard and probably for you guys as well when someone compliments you its really hard to say, be like “Thank you so much” but also not be a dick by going “Yeah I know”. And so you do that mid thing where you can’t really you want to say the nicest thing and you end up just saying “Cheers”.

JF If anyone is like reading this and think they’re dicks because I said nice things to them and they don’t really seem to care it’s not that we don’t care. We really do care it just kinda like balls up.

JW Its because we’ve heard so many stories of bands being arrogant or ignorant.

KC We try so hard to be not like the bands we’ve read about… I want people to talk to us about cool stuff. I want to hear what they do and what they listen to.

JW It’s not that we don’t want to talk to anyone it’s just sometimes when we first meet people we’re a bit edgy with what we say because we don’t want to annoy anyone or come across as like arseholes.

JF It’s the typical thing, you just try so hard to not be some thing and you end up doing it by accident. We’re nice so please come talk to us if you see us at Dot To Dot.

Are there advantages to being based in Nottingham?

KC 100%. I wouldn’t have met these guys if it hadn’t been for who I knew from Nottingham and who were in bands at the time… We’ve had such good press from people like Nusic, Leftlion and then Drowned In Sound.

JF The Chameleon! [A popular local Nottingham venue situated above a greeting card shop that has no stage]

KC We played there every single weekend for four months.

JF Every weekend when we first started, after college we’d somehow have a gig and then we’d plug in play, get paid, have a few beers and go. But we’ve not been able to play it and we really miss it.

JW When we play Nottingham now we have to get bigger venues because it will just pack out. It’s not a bad thing. We just miss playing it. We can’t go from like selling out the Bodega which is like 200 capacity and then try and headline Chameleon where it’s 80.

KC It would be really good for a mad one, one night.

JF We’ll definitely be back. Even if we get signed to some stupid massive fucking label we’ll happily randomly show up at the Chameleon.

JF Anton from DHP has been more of a manager to us than any manager we’ve ever had. He just keeps giving us the ideas to keep doing stuff. We have one meeting with him and it feels us with such confidence.

We’ve had a lot of ups and downs with management and things like that and then we meet with Anton and he says “Everything’s going to be fine. You guys are sick. I’m going to sort this out for you” and every time we want a gig he’s there. He always gets us what we want. He’s just amazing.

KC It must be the same for other cities, but Nottingham is such a community for music. No matter where you’ve come from and what sort of music you’re doing there’s always someone that’s going to enjoy it.

How did you become involved with Dot To Dot?

JW It was all to do with DHP.

JF They’ll give you some amazing gigs. We did loads of gigs with bands that are now massive. We started doing them with Rat Boy, Blossoms. Stuff like that. Them lot are just amazing. They do really care about music.  A lot of people get frustrated with “Oh yeah, no-ones helping us”

JW You don’t ask you don’t get.

JF You don’t ask you don’t get. That’s the biggest rule in the industry.

JW If you just sit there and not do anything who is going to know you exist? You’ve got to have a voice.

JF You could write the next Stairway To Heaven in your bedroom but if only your Mum and Dad is hearing it, it doesn’t really matter. People like Anton, Dan Roberts and Danielle at the Bodega, if they hear something they like they don’t care if you’re making money – they just want to help good music.

Anton helps so much and we really don’t have anything good to give back to him yet. Hopefully one day we can repay him for all he’s done. At the moment he just helps us because he’s a man who just love’s his music and that’s really what DHP is – a company based around music lovers. You look at anyone in that company and you can just tell that.

Why is Dot To Dot so important?

KC The amazing thing about it. As well as quite big acts you have this whole sort of outlook for all these local bands to be part of that. It’s like a massive fan base.

JW Bringing everyone together

What will it be like playing the festival in three different cities over three consecutive days?

KC We went on tour early in April with a band called Purson from London and that’s the first time we’ve done a set of shows that are in different cities every single time. And Joe Fisher, he drives everywhere so basically it’s a big challenge for you.

KC Manchester and Bristol. We’ve played both times there before. We’ve played Night & Day and Louisiana. Great venues. We’re really looking forward to seeing where we’re going to play there. We’ve had some idea. Nothings set in stone.

We’ve been working with Fred Perry for the Nottingham Show which should be really good.

What can we expect in the future for Crosa Rosa?