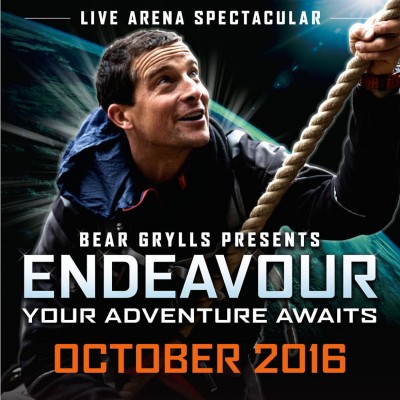 Bear Grylls Presents Endeavour: Your Adventure Awaits is a show which celebrates the arduous endeavours by the world’s greatest ever explorers. Perfect for fans of any age of the adventurer, explorer, writer and TV host Bear Grylls

Cutting edge video mapping technology and stunning visual special effects create an immersive expedition taking you to some of the world’s harshest hotspots and extreme environments.

The mind blowing show features aerial acrobats and a complete stunt crew create a whole new dimension of storytelling to truly show the perils explorers have faced in the past.

The audience will learn what it was like to be the first to step foot into a new wild wilderness and give them a new appreciation for the dangers explorers of the past faced and the feats of courage they performed to overcome against all the odds.

The true life tales will be brought to life and, with Bear as your guide, the audience will be invited to take a journey that sees them trek across the frozen uninhabited landmass of Antarctica, against the cruel winds of Everest, through the ever humid jungle and into the deep shark-infested sea.

A truly spectacular show which will make you marvel at the wonder of the world and behold the bravery of those who dared to discover its secrets.

Bear Grylls said: “I am so excited to see this show truly come to life, and to be able to take people on this incredibly inspiring journey of courage, heroism and survival against all the odds.

With Endeavour we harness so much ground-breaking new technology to take the audience on a very intimate, immersive & at times terrifying journey through some of the greatest and most unknown feats of exploration.

It is a truly uplifting experience this show, and I am so proud of it - and it reminds us all that at the heart of so many of mankind's greatest achievements and hair raising adventures is this one word: Endeavour.”

These exciting events are set to take place across the country this October: